In Search of Red Dream in Berlin

Reason has always existed, but not always in a reasonable form. – Karl Marx

Finally, THE LEFT, left out from Bengal and left behind a series of riddles for those who could mock a small cluster of people Inside-out still bled RED. Long back, when I opened my eyes here in Calcutta, it was red dreams everywhere and rest is history. Now, here in Kolkata, a class still missed those days and I am one among them. In the early ‘90s, I travelled a road full of red faiths, unfortunately, chased the right dream with a group of false friends. This doesn’t mean that I lost the faith but eventually, that made me more curious not that curious case of Benjamin’. But that made me read and read more and that develops my idea of how an ideal state we would think of. I never lost the faith on the creator of the red nucleus. Maybe it could be the reason I searched for red trails on my two-day trip to Berlin.

I am sorry Mr Karl; I didn’t find you in your own country, though you died stateless. Neither I find your humanism nor the reflection of your doctrine. Everything has changed now, in fact, your statue at a corner of the park at Alexanderplatz is converted into a smoking zone. Only good news for you is that people take photos with you, but sometimes they get confused whether you were a human or a horse. I know you are not trusting me but have enough proof with me. I won’t lie to you because my surname ‘Das’ is very popular in Bengal, hope you also don’t remember the remaining portion of the ‘DAS’ book. Or maybe you think we are extinct that made me mad. Nope, sorry that’s not the reason. 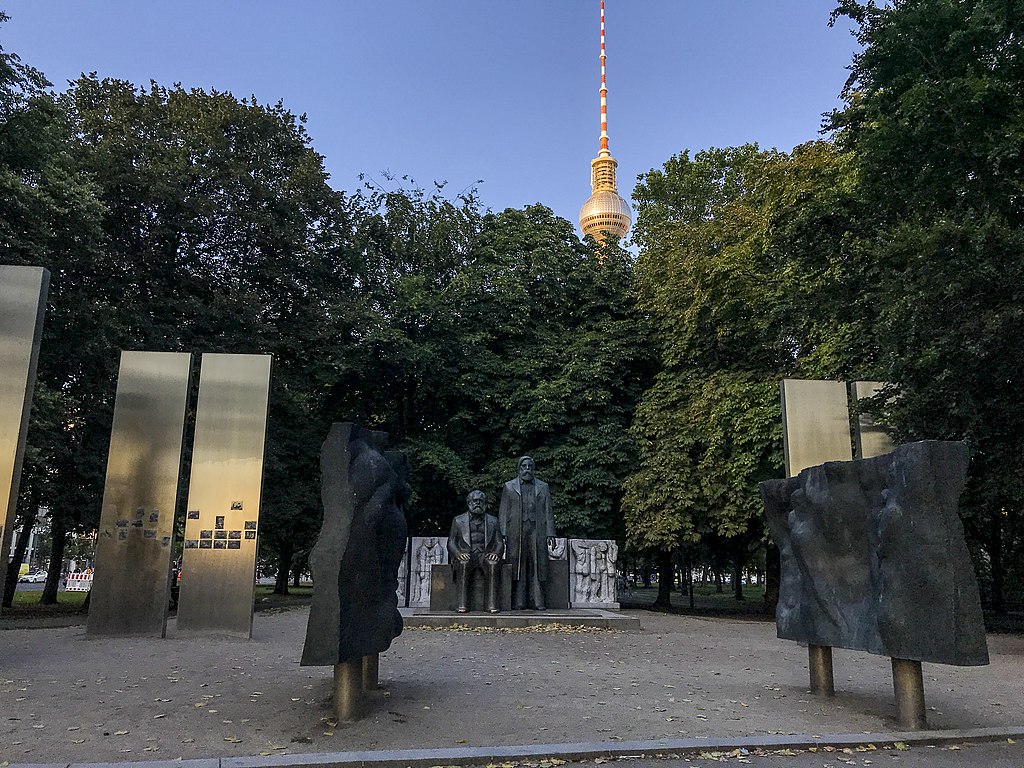 Now listen, I am sad and was equally sad while sitting opposite of your statue watching the crowd taking photos with you. Oh! I forget to tell you it was my second day in your country. You know on the first day I have been to the Berlin Wall; I know you have no such ideas about the wall. But I have seen you there wearing the finest suit length, put a big fat smile and carrying an office bag, just look like a capitalist icon. But I did not understand what you kept inside the bag. Now, how people of your own country interpret you. I wasn’t surprised at all. As I had a little idea about your present situations, someone told me before I land to my dream destination. He warned me to come out from my red dreams to reality and not to talk about the communist regime in public under excitement. Warned me further, it’s okay to some extent to talk about you but not about your post-production. Seriously, at a first go, I didn’t care what he told me. But there is always a ‘BUT’. On my first day, I was looking for something inside Humboldt, which could make me feel your presence. But I didn’t find any single interested person to help me in my search. I know you do not understand what I was looking for. For your kind information, in Humboldt “Marxism-Leninism (ML)” neither you nor your post-production, not taught there anymore. But a bottle of fine German beer sells in ‘ML’ is very cheap.

One thought came into my mind, whether you are becoming irrelevant or obnoxious? Believe me, I did not allow myself for the second time for such a thought. 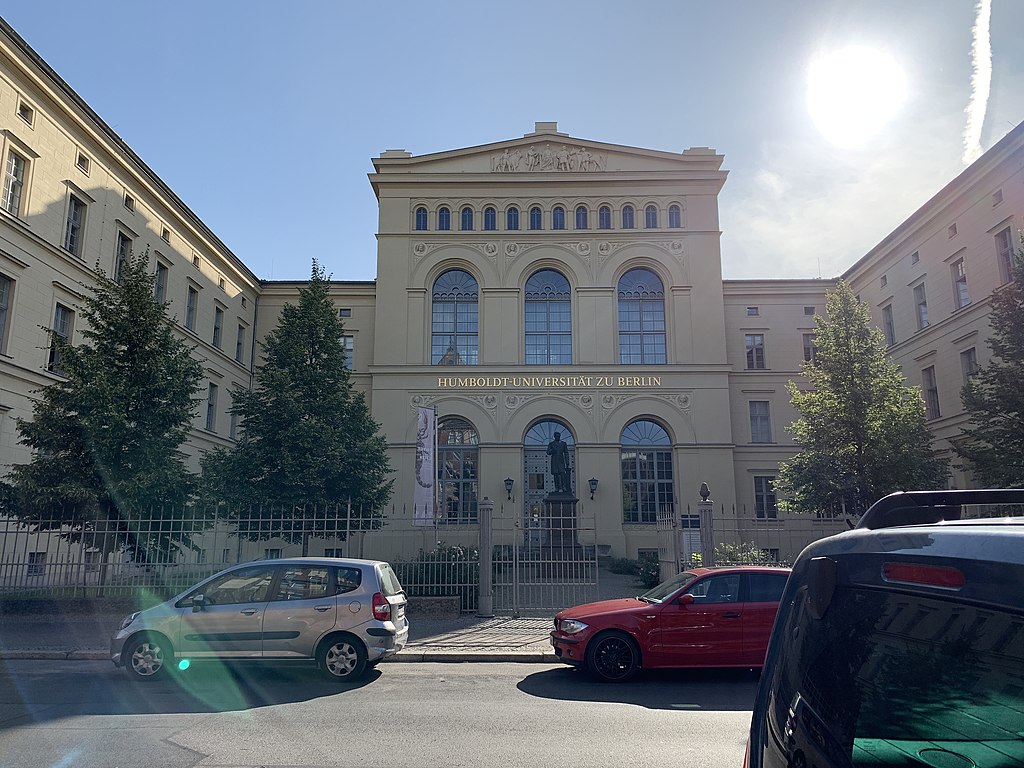 How come you could be irrelevant? Suddenly, I think of your memorial in Moscow, whose inscription reads: “Proletarians of all countries, unite!” That ignites me once again and again I started walking, in search of the red trails in Berlin. If I might miss any place related to you, that’s why I didn’t use any public transport. I was on my foot to explore your city and roads leads me to a place called Checkpoint Charlie. It had shattered all my hopes when I reached there. I see a huge Mc Donald on the right side of the Checkpoint Charlie. I was a fool, I should understand the fact in advance when I saw Berliner Fernsehturm. That television tower, which is bigger than your statue. What I understand, before your ideas get reached to the people, they malign the ideas. What I understand, your ideas are not dead, it is very much alive and will remain. But the mass is transforming and they are almost ideologically dead. Maybe you are not there anymore, but so-called communist impressions are still there. 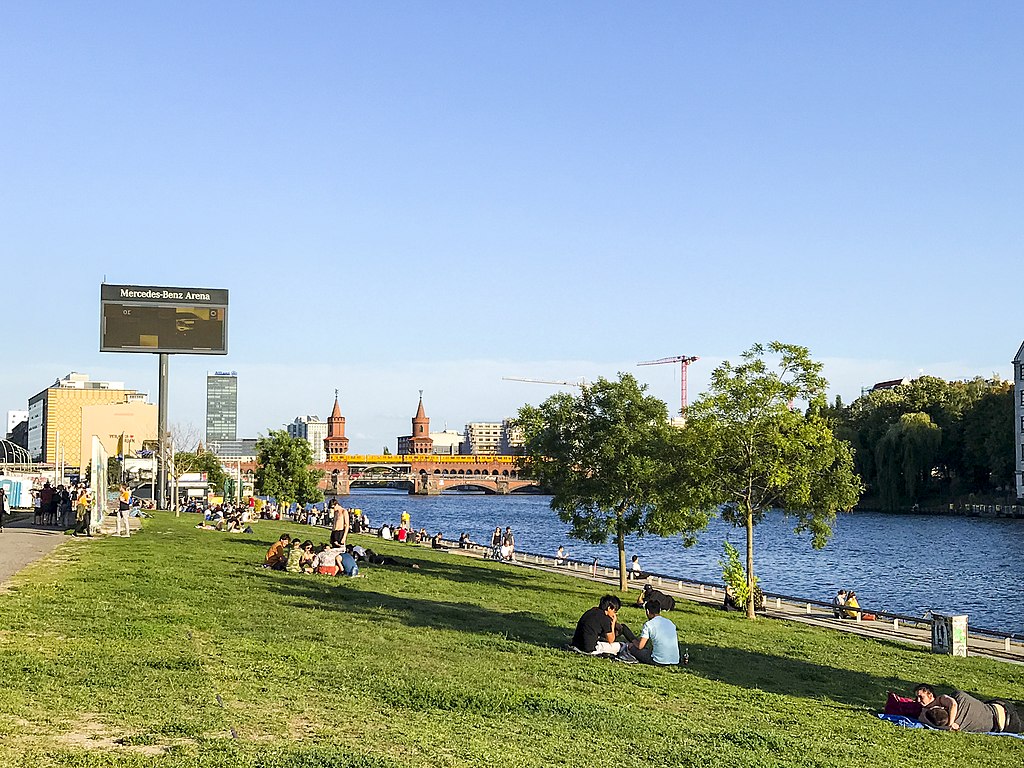 Let’s explore communist footprints in Germany’s capital city, Berlin. For me, Berlin is a beautiful city. The city maintained a balance between the old and the new architecture. Wherever you go in Berlin, the city would remind you about the pedigree of the city. The city looks so royal that reflects its rich culture in every aspect. Wherever I walked in the city, the city keeps reminding me how lucky I am to be here. 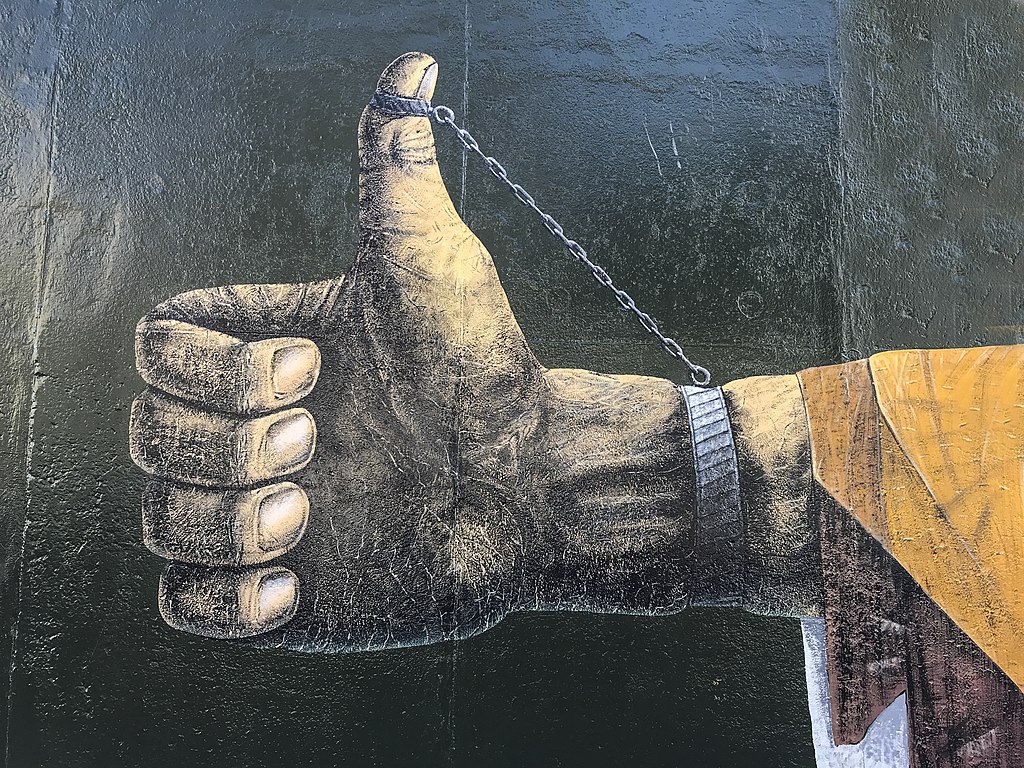 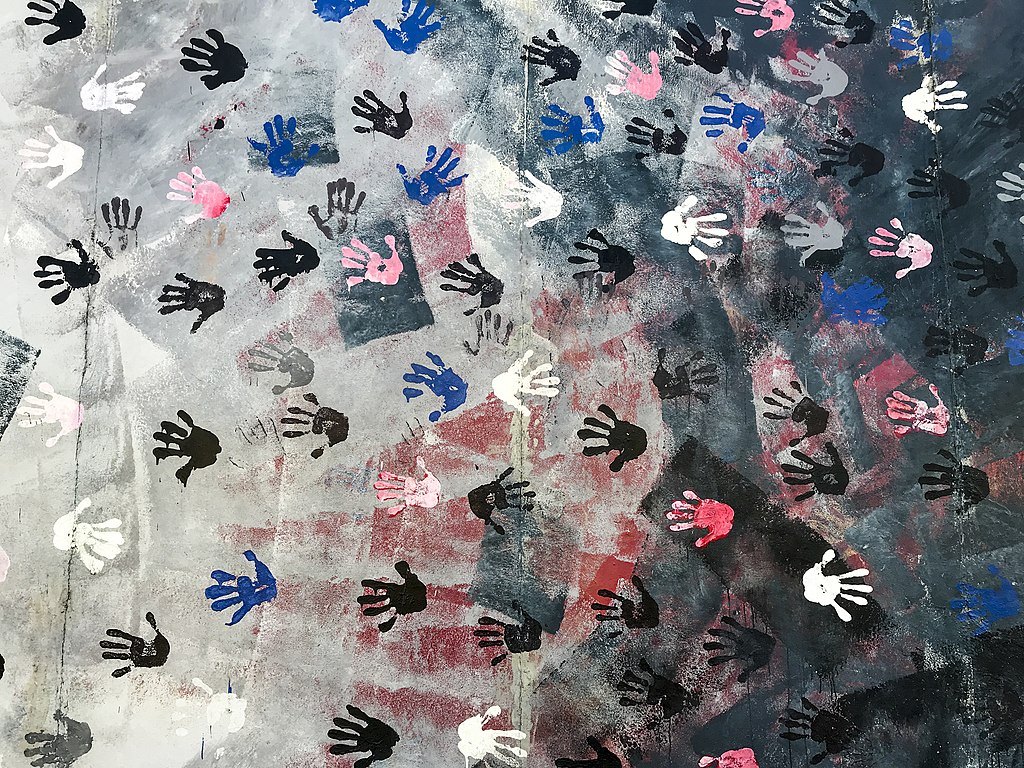 Wall of Shame – The Berlin Wall

If you walk on the streets of Berlin, almost everywhere one can notice plaques that depict where the wall once stood but the significant portion of the wall still there at the East Side Gallery. It’s best to walk from the DDR Museum and take the Mühlenstrasse road on the banks of river Spree. On 13th August 1961, the GDR constructed this wall to keep ‘FASCISTS’ Western Germany out of East. This was an ideological division between east and west, although it was also physical. It was also a distinct mental separation. Please don’t compare this with the feelings of Prussia vs Bavarian feelings. Although, many checkpoints at the wall were constructed to allow visitors from east to west and vice a Versa. Everything has changed now. This portion of the city is very popular among tourists. From beginning to the end of the wall is full of graffiti that attracts most tourists like me to take selfies with graffiti. And I moved on…… 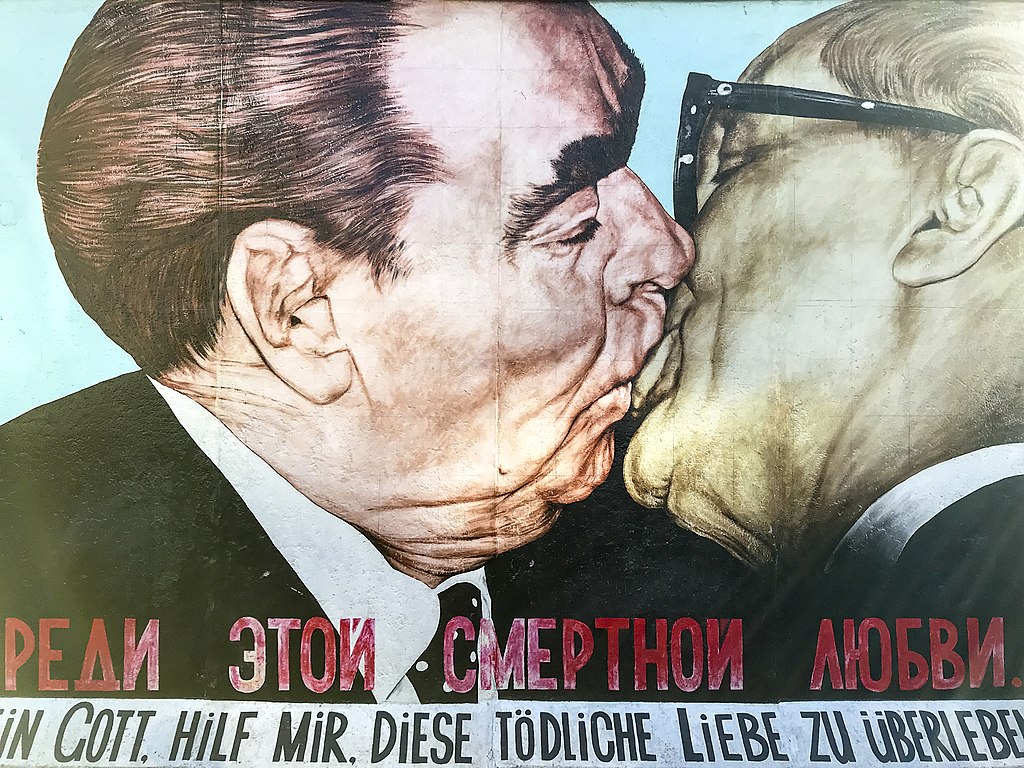 The building was inaugurated by the Prussian The 1st (Emperor Alexander) Guards Grenadiers on the occasion of the official visit of the emperor of Russia (Alexander I) on 18th September 1818 ordered by the King Frederick William III of Prussia to build this guardhouse. This is not the only history behind Neue Wache, this building witnessed many ups and downs of historical events. It’s in the Mitte (Middle) district and after WWII Mitte was a part of a Soviet sector of Allied-occupied Berlin and afterwards, it was a part of East Berlin. So, the impression of Redline was there. In 1957 communist party started to rebuild it and in 1960 they open it for the public as a “Memorial to the Victims of Fascism and Militarism” but East and West were divided then. But after the reunification of East and West German the Neue Wache declared as “Central Memorial of the Federal Republic of Germany for the Victims of War and Dictatorship.” Dictatorship, yes rightly understand, this refers to the man with a small moustache, whose party name was the biggest joke of the millennium ‘Socialist party’.

This building was constructed in 1935-1936 during the Nazi regime and it was one of the most prestigious projects of Nazi’s in Berlin. They served it as the headquarters for the Reich Aviation Ministry until the end of the Second World War. Member of Rote Kapelle (Red Orchestra or Red Chapel), known in Germany as anti-Nazi resistance workers planned their activities here. Today, a memorial in the entrance hall commemorates the resistance fighter. This building played a central stage that was an important history of the GDR. After WWII, Soviet military administration used this building as a headquarter of Central administrative organisation for German Economic commission from 1947 to 48. After the reunification of East and West, the Berlin branches of the Federal Ministry of Finance and the Federal Court of Auditors set up an office in this building. The present name of this building ‘The Detlev Rohwedder Building’ given in memory of Treuhandanstalt’s first president. Many important meetings and events happened during the period of the Red regime. A video show on the history of the building runs all the time just opposite side of this building. 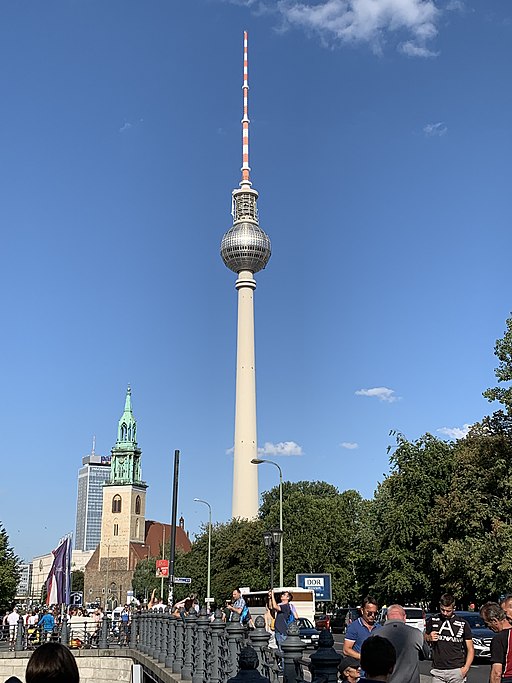 Wherever you walk, you can notice this huge tower like this tower will follow you. It’s a thousand times bigger than the statue of Marx and Engel. The tower erected between 1965-69 by GDR (East Germany) as a symbol of communists’ POWER. It’s near Alexanderplatz in Mitte district. This is the same Alexanderplatz area, where statues of Karl Marx and Friedrich Engels are there and this tower looks nice behind the statue. Alexanderplatz was a very happening place before WWII and also after post-war for the Berliners. Still, it reminds the song ‘Viva La Quinta Brigada’, as many important party events had taken place in this area. Although, in this tower, there is a revolving restaurant where you can enjoy food along with an aerial view of Berlin. A warning for the Proletarians, stay away from this restaurant. 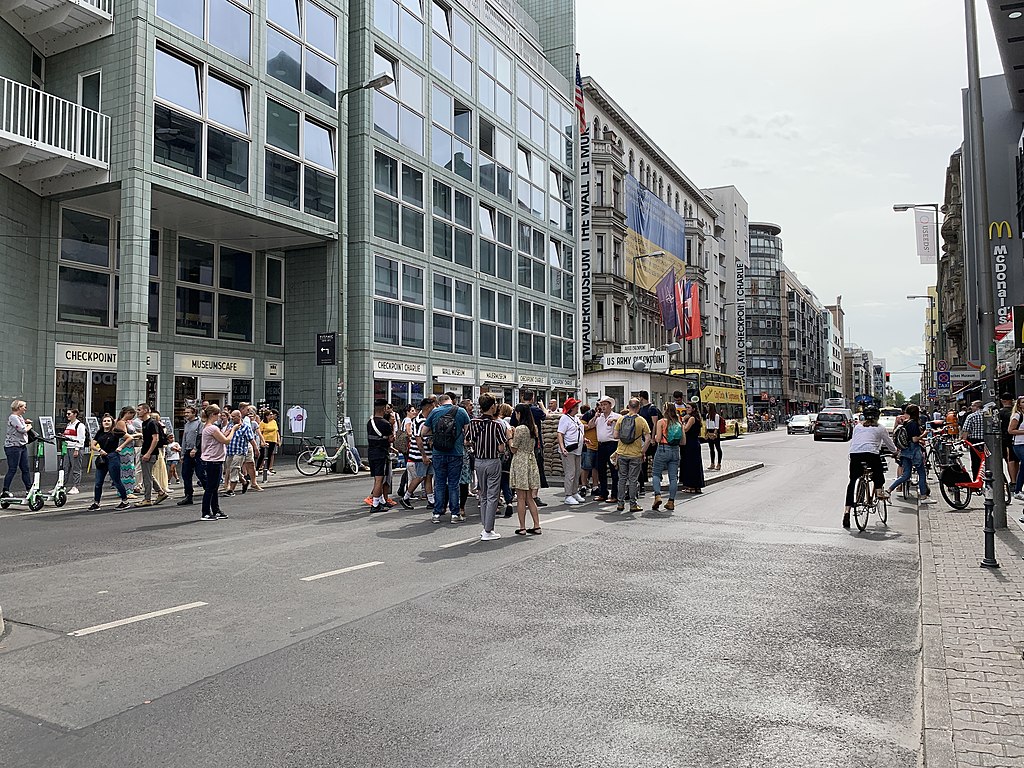 There was a checkpoint for crossing either side of the Berlin wall. Now, a replica exists, just representing the separation. Here, you can take photographs with the guards. Now it’s a tourist place. But during the cold war, American and Soviet tanks faced each other. Now, there are no symbols or signs of the Soviet, but Americans are still there selling Chicken Burger to Berliners. If someone has the Red hangover can try Cafe Sybelle, the shop witnessed many events during Communism. I have visited the shop but didn’t found it’s meant for the Proletariats. Better you opt for Mc Donald.

Nothing is here other than Frankfurt Gate and Socialist towers. In my city, there is a street called Karl-Marx Sarani, where Sarani and Dharani are there but nothing about Marx. I saw same in Karl-Marx-Alle, the earlier name of the street was Stalinallee, also funniest to the infinite.