But the question is why I am so much concerned about the architecture of graves of different religions or why I am talking about this. Because I recently visited a graveyard in Kolkata, what I saw there, the architecture of the graves follows a completely different set of perceptions. Each and every grave reflects Christianity, Islam, and Hindu as a whole. I was completely spellbound to see those graves and I found that how our ancestors were so modern, almost 200 years back. Unfortunately, we couldn’t carry neither their legacy or nor the ideologies. How did they thought and talked about the secularism in the 18th or 19th century. Yes, you are right, I am talking about the Brahmo religion and I visited the graveyard called Nabodebalay. The architecture of those graves was designed in such a way that certainly reflects the true spirit of secularism.

Presently, we, Indians are living in such liberal conditions that now we can’t even imagine how rigid our society was during the 18th or 19th century. Earlier, the society was completely cast ridden, decadent and hugely rigid, more of it, our country was under foreign domination. The present condition is the gift from our ancestors and we are really lucky enough. British ruled our country, rather ruled brutally but we have to admit that apart from their ill political policies they came up with some modern ideas. The idea of social, economic, liberty, justice, a democracy that hugely impacted on our nation.

There were some enlightened Indian like Raja Ram Mohan Roy, Ishwar Chandra Vidyasagar, Dayanand Saraswati and many others those who had contributed and devoted their life towards building our nation. They started Religious Reforms movement in India and as a result, Raja Ram Mohan Roy started Brahmo Samaj, Prarthana Samaj was established in Bombay by Dr. Atma Ram Pandurang, Arya Samaj by Mool Shanker later came to known as Dayanand Saraswati. Not only the sons of Indian soil took part in religious reforms but also some kind people like Henry Lui Vivian Derozio took an active role in it. He started The Young Bengal Movement. The Ramakrishna Mission and Swami Vivekananda were also in the movement. This movement was not confined to one section or in one specific religion but it was also been adopted by other religions such as Islam, Sikhism, even in Zoroastrian. Sayyid Ahmed of Rai Bareilly was the most notable Muslim reformer of the 19th century. In middle of the 19th century among Parsees, Rehnumai Maz’dayasan Sabha was founded by Dadabhai Naoroji, Nauroji Furdonji, S.S. Bengalee and others. But among them Raja Ram Mohan Roy was the pioneer.

Raja Ram Mohan Roy (1772-1833) & Brahmo Samaj – He was the greatest son of India. Not only he had contributed to building our nation, equally influenced other parts of the world. He was born in an orthodox Hindu Brahmin family in the year of 1772 and got his early education in Patna and Varanasi. He worked for a period of ten years in British East India Company, initially joined as a Munshi of Registrar of the Appellate Court at Murshidabad. But he didn’t work at a stretch, had been as an on and off worker. He went to England as an ambassador of the Mughal Emperor, Akbar Shah II, who gave him the title “Raja” to the court of King William IV.

He was a scholar and had extreme command over many languages like Sanskrit, Persian, Arabic, Hebrew, Greek, and English. He translated Kena Upanishad and also some portion of Vedanta texts. In the year of 1821, he started a Bengali weekly newspaper “Sambad Kaumudi” and this was the first Indian Newspaper edited and published by the Indians. Apart from the various Indian languages, he contributed to other foreign languages. He started publishing a Persian newsmagazine titled “Mirat-ul-Akbar” in 1822. His other Persian works include “Tuhfat-ul-Muwahhidin” and “Manazarutul Adyan”. He founded Hindu College in Kolkata along with Radhakanta Deb and others in the year of 1817. Later, it was renamed as Presidency College in 1855. Todays, Presidency University is one of the best university of India, is actually a gift of Raja Ram Mohan Roy.

He was not merely a religious reformer but also a great social reformer. He stood against the rigidity, caste system, falsehood, superstitions, sacrificial rites and many other meaningless rituals of orthodox Hindu society. He founded “Amtiya Sabha” in 1815, which was a forerunner in the socio-religious reforms in Bengal. Finally, In the year of 1828, he founded Brahmo Samaj or Divine Society or Society of Brahma with Maharshi Devendranath Tagore. Brahmo Samaj attracted Indians who sought to reconcile the values of the West with the religious traditions of India. They outlawed many of the abuses in India such as slavery prohibitions against widows remarrying. The result of it prohibitions against widows remarrying was revoked in 1856. Even this society was also fought against female infanticide and it was made a crime in 1870. So, Brahmo Religion played a crucial role in the context of religious reform and as well as in social reforms in India.

Raja Ram Mohan Roy died on 27 September 1833 in Bristol, United Kingdom, and a born Hindu but he was not cremated by the Hindu Law. He was originally buried abides by the rule of Brahmoism on 18 October 1833, in the grounds of Stapleton Grove. 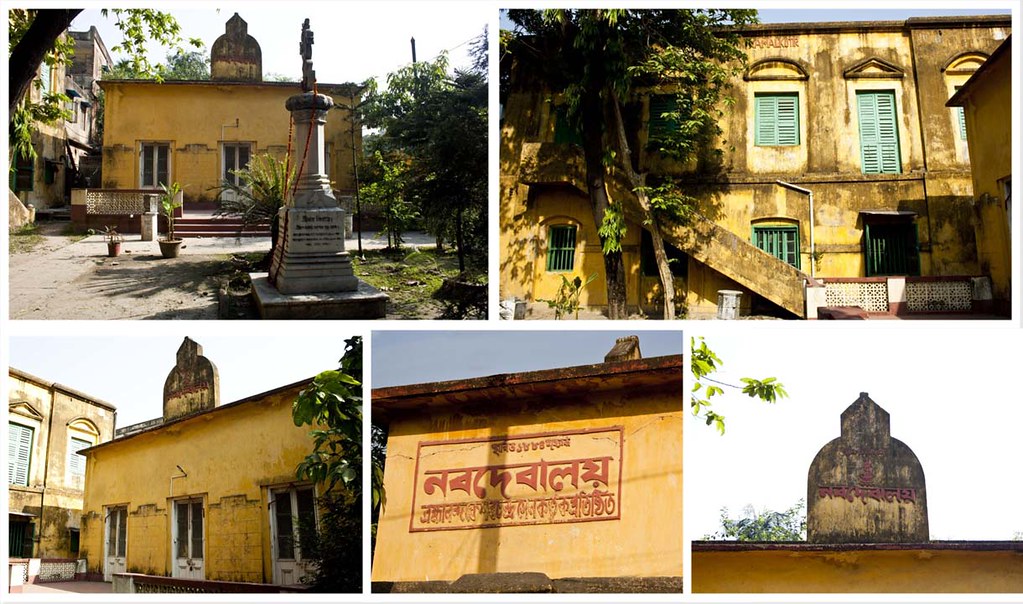 After his death, the legacy of Brahmo Samaj was in the safe hands of many great sons of India and among them was Keshab Chandra Sen (1838 – 1884), deserves a special mention.

Brahmo Samaj was established with the influences of many religions or it is a confluence of many religions. That can be easily understood by the process or the rituals they follow after the death, they bury not cremate the body. As I have mentioned earlier, Raja Ram Mohan Roy was born as a Hindu but his body was buried abides by the rule of Brahmoism. We can notice a completely different picture in the case of Rabindranath Tagore. He was also a Brahmo, he was not buried but was cremated.

Last year, I went to a cemetery which lies on A P C Road, near Rajabazar, Kolkata. Seriously, I don’t know whether I will refer the place as Cemetery or Graveyard or Samadhisthal or whatever. Even, I don’t have any clear idea how Brahmos referred this place. Although, Nabodebalaya is a Cemetery of the Brahmo Samaj. The literal meaning of Nabadebalaya is a New place of God (Naba or Nabo is Bengali word meaning in English is New, Deba is God and Alaya meaning is A Place). It was established in the year 1884 by Keshab Chandra Sen. This cemetery is located inside the premises of Victoria College and there I found a hall dedicated to the memory of great Keshab Chandra Sen called “Keshab Memorial Hall”. Kamalkutir is situated along the side of this hall and the cemetery is attached to it. 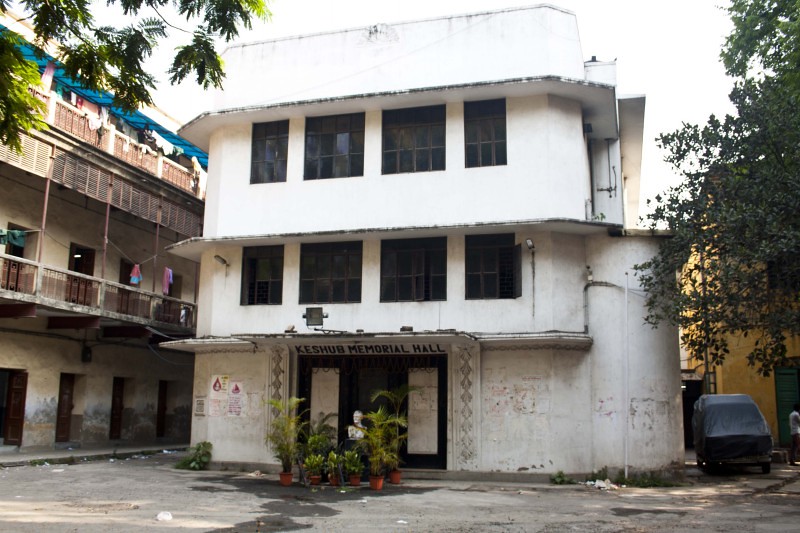 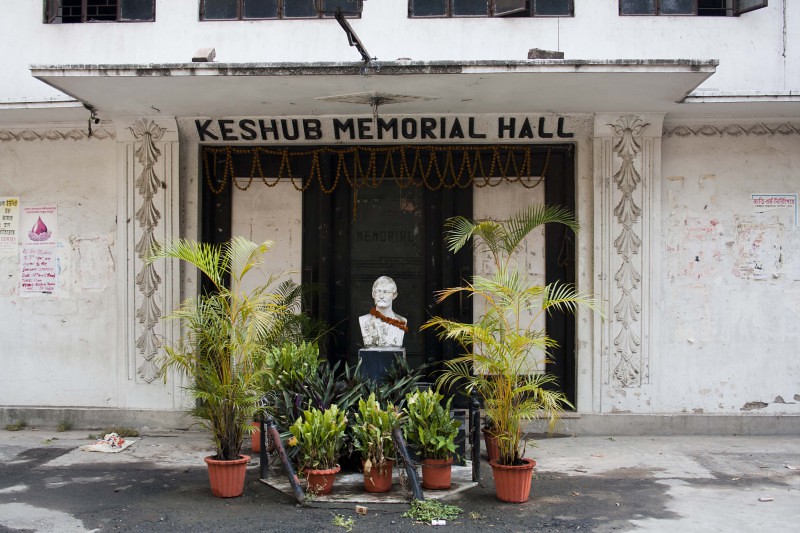 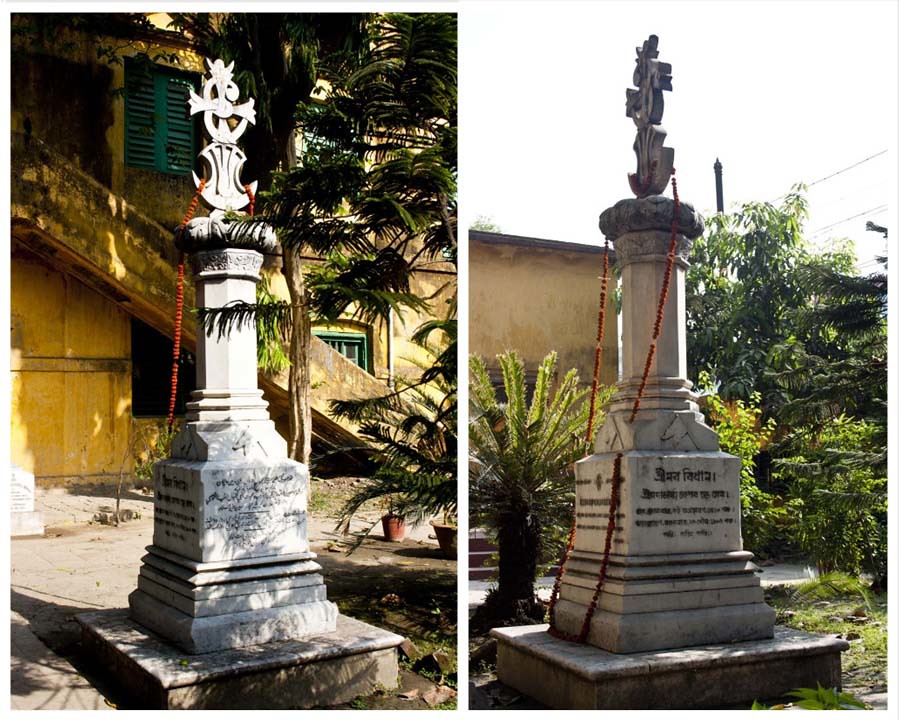 The most interesting part was the architecture of the graves. For many years, I have visited many cemetery or graveyard of different religions, many times. Naturally, I have seen many different types of mausoleums with varieties of architectural style. But here, what I have found was completely different than others that I have never seen before. AUM or Om (Sanskrit: ॐ) which is a sacred sound and also a spiritual icon of Hinduism depicted at the top of almost every tomb along with a Cross of Jesus Christ. Just below of those symbols, there is a crescent. Not only that each and every gravestone is written in three different languages, Bengali, English, and Arabic or Urdu (As I can’t distinguish in between Arabic or Urdu). 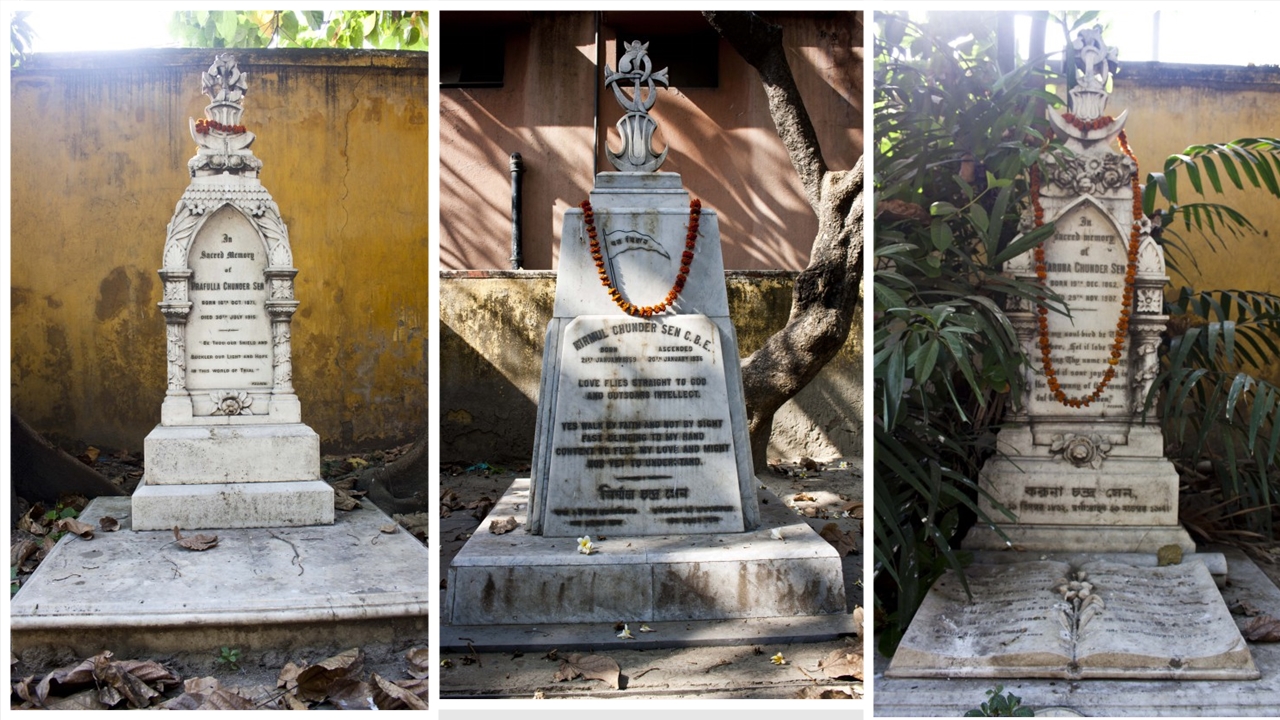 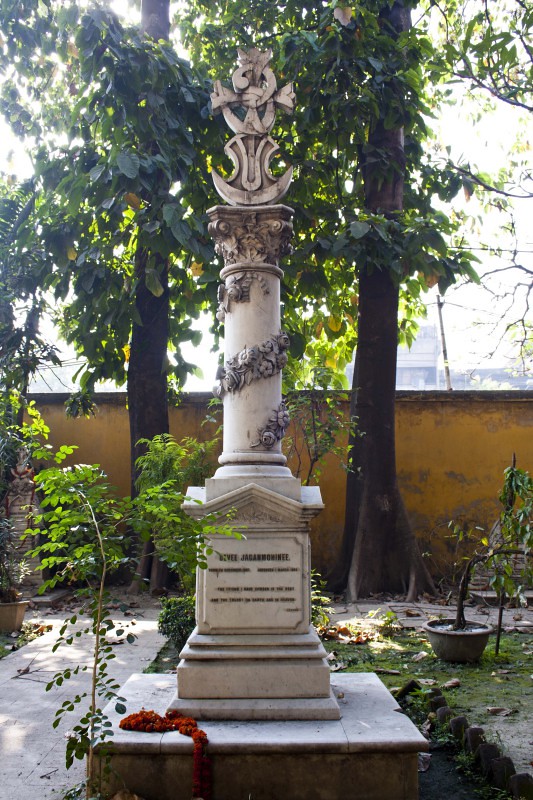 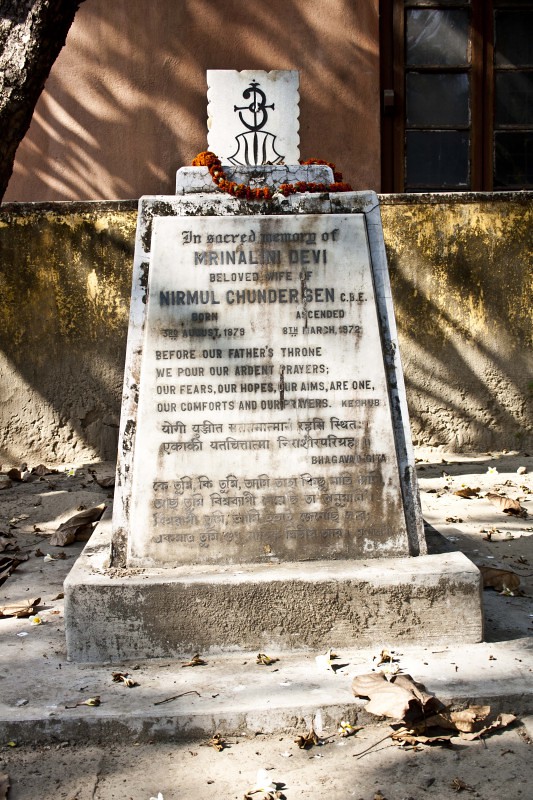 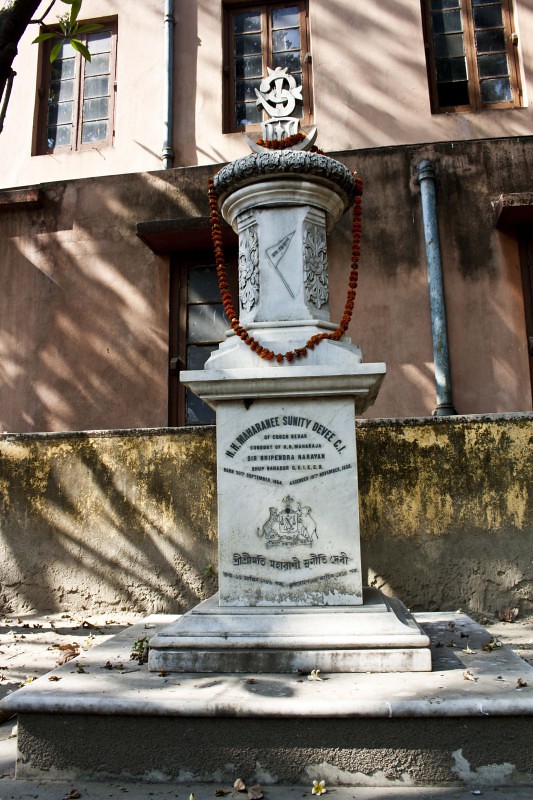 I was utterly surprised while witnessing such a great conception for the first time. Which reflects the true spirit of a religion. Basically, it is the true reflection of the philosophy of great Raja Ram Mohan Roy. Maybe he born in an orthodox Hindu Brahmin family but he attacked idol worship. Actually, he was highly influenced by the monotheism and anti-idolatry of Islam, Christianity, and Sufism. Not only that, he was deeply influenced by the liberal and rationalist doctrines of the West. Originally, he expounded the conception of “One God of all religions and humanity“. 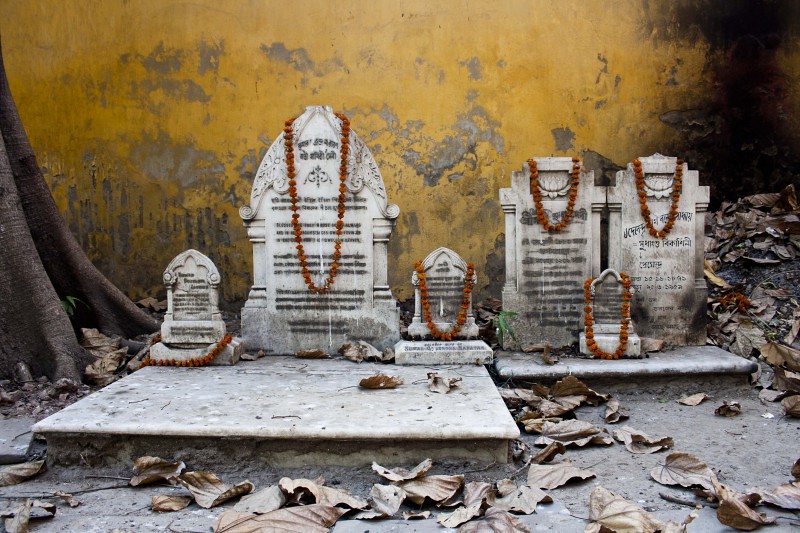 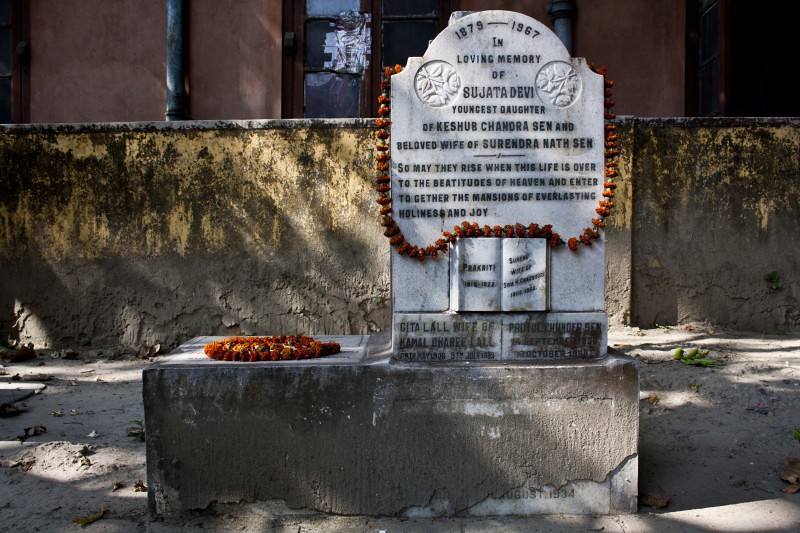 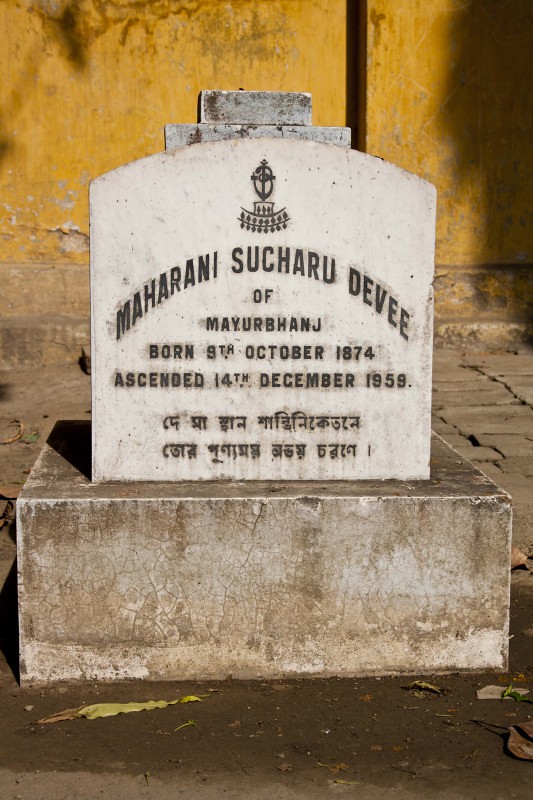 How relevant is it at the present time, when we fight on the basis of religions. I think this is the perfect place from where new modern generation can learn, what is called real secularism.

Special Thanks to Samrat Dey Sarkar (Sammy) for his support throughout the photowalk.