Piece of Greenery in Jungle of Concrete 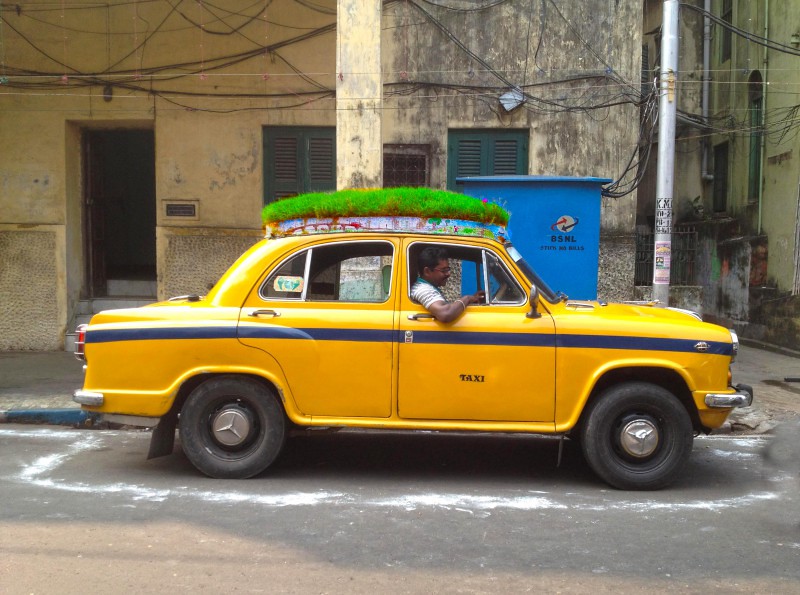 Charging extra money in extreme emergency, where refusal is common these days, from bad behavior to molestation, in some cases they beat up passengers brutally,  those are the examples set by the Taxi Drivers of Kolkata. It does not mean that all taxi drivers are unrighteous, Sometime we found extreme opposite stories from them.

A person who never demands extra money from his passengers but demands comes in such a way that surprises the passengers. He request them to plant a sapling. I am talking about a taxi driver from my city Kolkata, Mr.Dhananjoy Chakraborty aka Bapi. Now he is a Celebrity Taxi Driver of our city. Many news channels, news papers covered his story and he participated in a popular Bengali reality show called “DadaGiri” hosted by Ex-Captain of Indian Cricket team Sourav Ganguly that put him to lime light.
Bapi Chakraborty he drives a yellow Ambassador Taxi and the roof of the taxi is fully covered with bed of grass and some plants also been installed on the tray of rear seat of the taxi. He paints so well and he writes rhymes in Bengali. His paintings can also be notice in his Taxi and his own rhymes written on many places of the taxi. 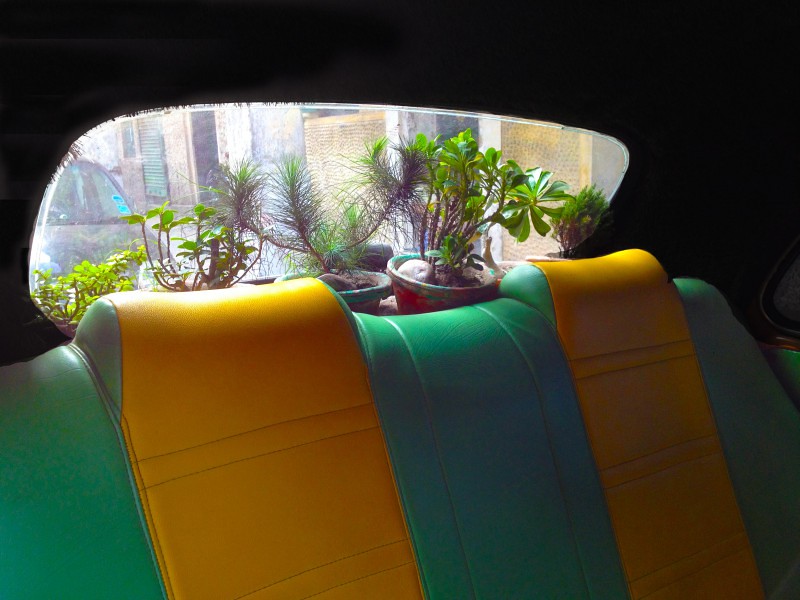 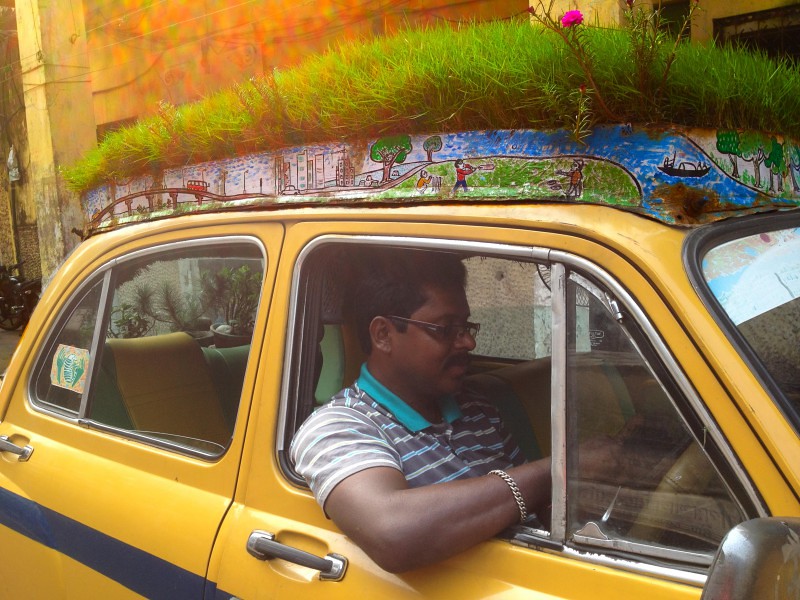 During this year Durga Puja, suddenly I discovered him for the first time near Beadon Street area of North Kolkata with his Green Taxi in morning time. I spoke to him and asked him few questions. He answered my every questions very politely and I found a very well behaved soft spoken educated gentle man in him. I asked him about whether his family supports his passion for nature, he told me that his family is supportive to some extent but they do not like that he spends so much for it and that’s why he couldn’t save from his earnings. He talked about Global warming and conversations of nature with me. He is a intense nature lover and started doing awareness programs on nature in various schools. On serious note I didn’t saw such a person in my life and in true sense what he is doing is really commendable.

Suddenly I noticed some burned marks of him and I asked him about it. Some 8/9 years ago he met with an accident and he was burned very badly. During that time he was forced to sold his own taxi to continue his treatment. At present, the taxi he drives is not his own taxi and with many hurdles of life he does not give up his passion for nature. The taxi he drives is not his own taxi but in spite of that he maintained the car so well. The taxi was so clean and what I have found that inside the taxi was little cooler than any other non-ac taxi because of installed plants inside. He smiled and said to me that he called his taxi “Sabuj Rath” (Green Chariot) and people called him Geechho Bapi (Geecho mean Tree Loving). 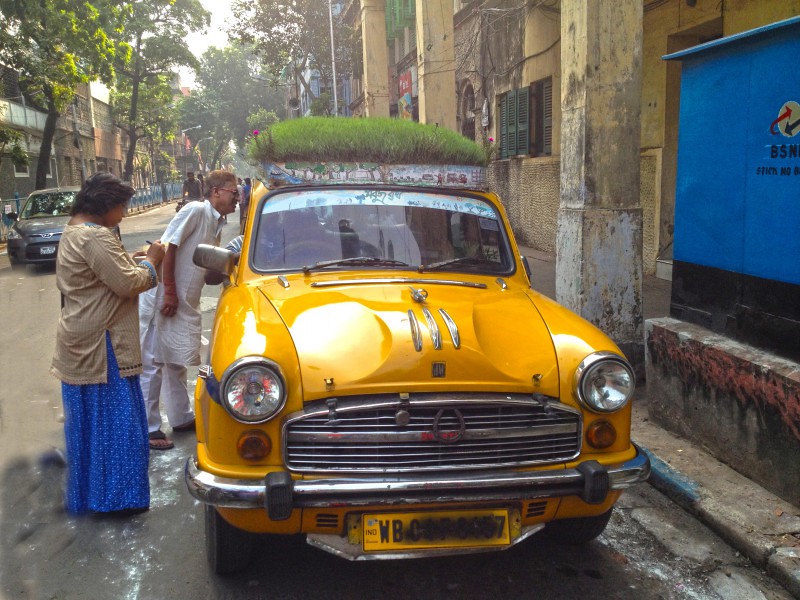 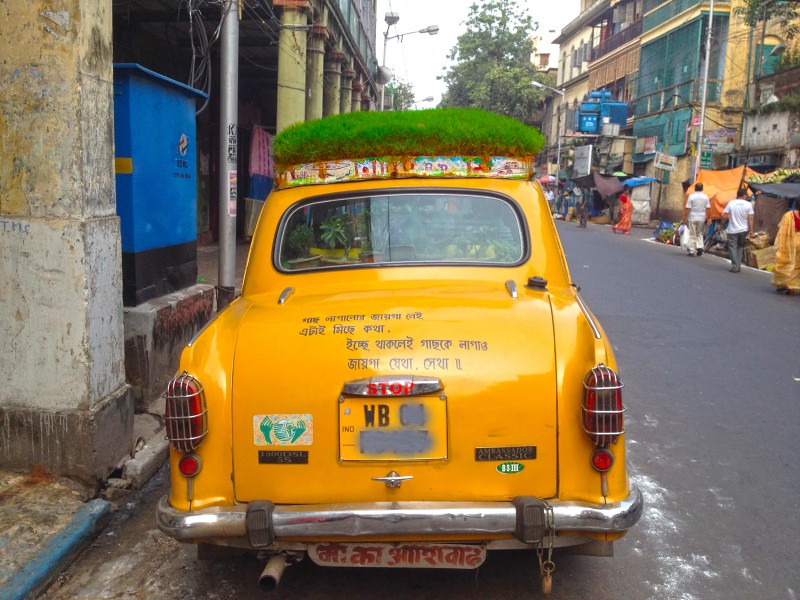 Our discussion was little stretched and he gave me his number for further contact. When I turned back to leave, he called me and gave me leaflets. Leaflets contains some of his own rhymes and paintings, conveying messages of nature preservation. When passengers board his taxi, firstly he convey messages  and before leaving his taxi he distributes leaflets to the passengers for further awareness on environment preservation. 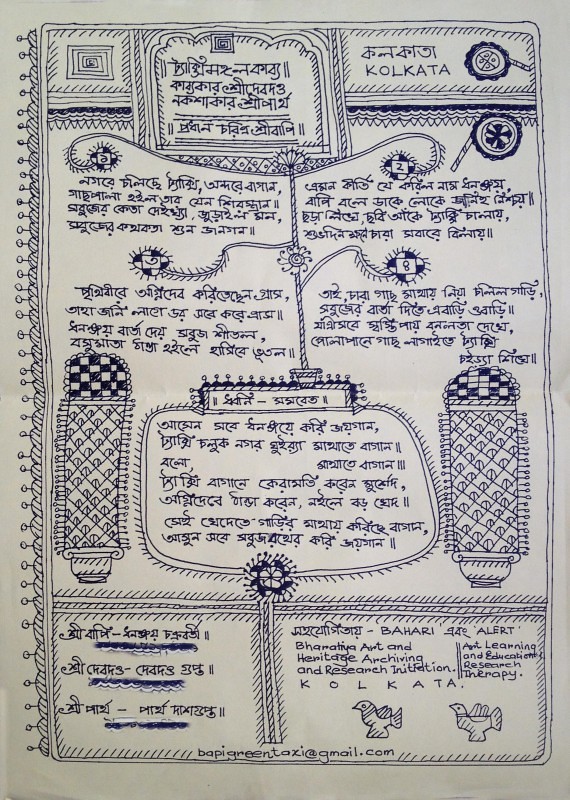 One can further contact Mr.Dhananjay Chakraborty through Facebook account called “Bapi Green Taxi” and E-Mail Id :- bapigreentaxi@gmail.com . This is the unique taxi in my city and it is a Green Taxi in every aspects. The person who drives the “Sabuj Rath” a Gem and I am so proud that we are from the same city.

Copyright © BongBlogger
you can share this post subjects to the conditions that please give due credit to Author Indrajit Das and do not alter before sharing. Request do not Plagiarize.
If you found your photographs here and have issues with that please E-mail me with your requests, I will remove your photographs from public domain.