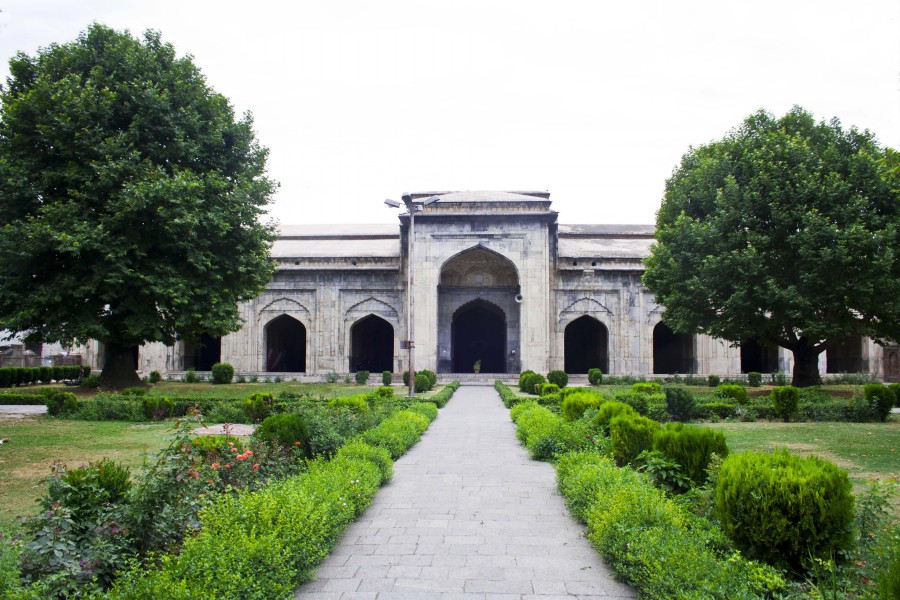 After so much of drama at Roza Bal, I was tensed but not scared. Also, I got an overall idea about the place and thereafter planned my trip accordingly. That day I reached the bank of Jhelum and standing on a small bridge on the River. On my left was Khanqah Shahi Hamadan and on the right was Pathar Masjid. I was feeling as if I am Robert Kincaid but It was another mistake. Robert went to a beautiful place called Madison and I was standing in a beautiful but controversial place called Srinagar. A beautiful lady didn’t come out but a group of locals gathered behind me. Before I could understand anything they snatched my camera. My dream to be like Robert was shattered and I came into the reality. This was for the second time I got into trouble. Although, It was a separate episode. 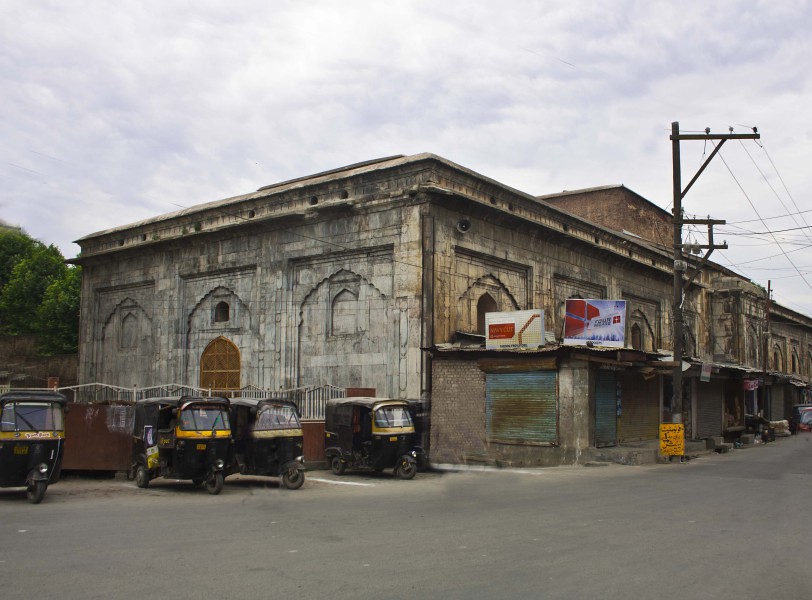 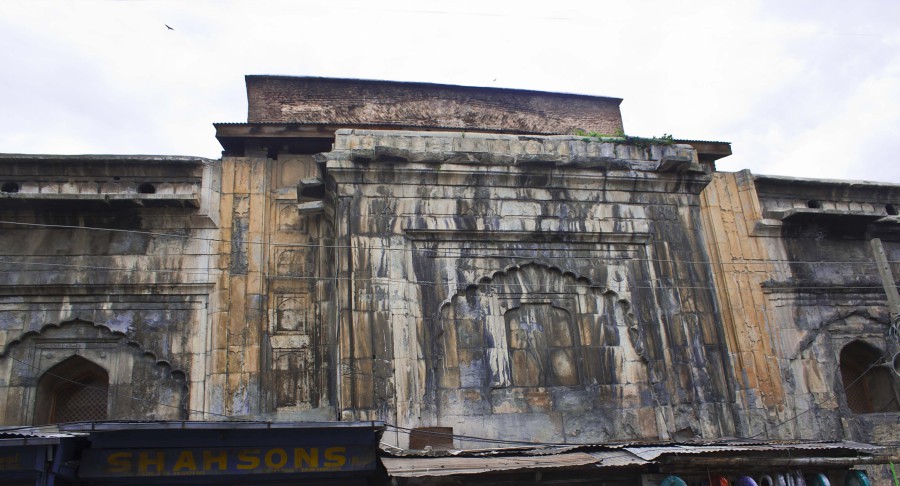 Somehow I managed the situation and reached Pathar Masjid. But I couldn’t find the entrance of the mosque. The outer wall of the mosque was surrounded by shops and was closed during that time. The entire locality was also completely empty. I started losing my confidence and felt lonely. The Old Zaina Kadal police station was just opposite side of the mosque and I went there to know the location of the entrance of the mosque. Basically, I was seeking for some mental support. I found an Indian Military outpost in front of the police station. A tall and handsome Military came out from the bunker. We exchanged smiles and after that, I started gaining confidence. I asked him about the entrance and also the reason for the curfew-like situation. Then I learned from him that the situation of the valley is not well and he suggested me not to roam in the remote areas.

The mosque was not very impressive from the outside. But I was eager to see the mosque as because It was built by Mughal Empress Nur Jahan. Few months before the trip, I don’t know what happened to me I was so obsessed about Nur Jahan. By the way, this was not the only reason for the visit. 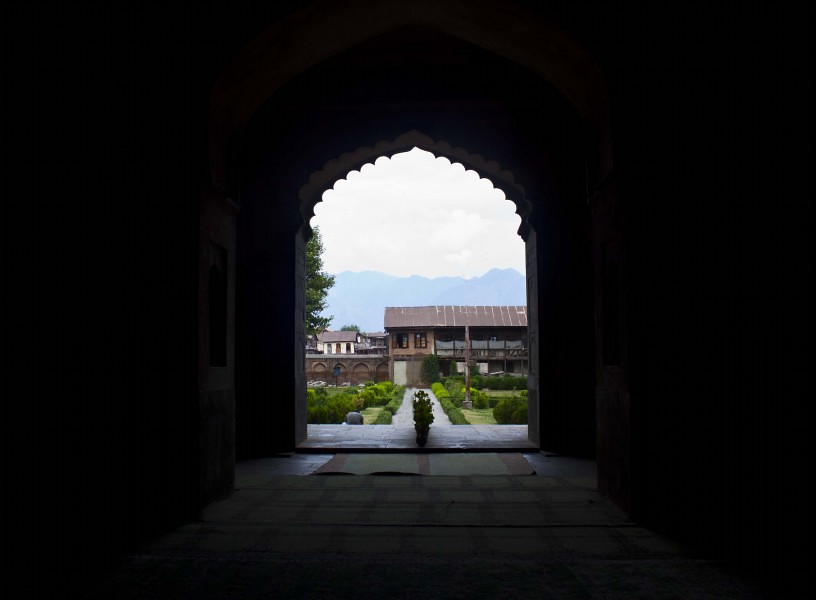 Pathar Masjid – This mosque is locally known as Naev Masjid and built by Mughal Empress Nur Jahan the wife of Emperor Jahangir, in 1623 AD, constructed under the supervision of Mughal historian and architect Malik Hyder Chaudhary. Generally, mosques in the valley were built with wood while this mosque built with stone, as most of the Mughal edifices were built with Marble. Pathar masjid was built with locally available grey limestone and the style is practically the same as edifices found in Delhi and Agra. The grey limestone was generally used in Kashmir for face work and this stone is an excellent material for carving and for moldings. Also, high grade of polish is possible on this stone and same testified in the pavilion of Shalimar Bagh. The facade of Pathar Masjid, “The Stone Mosque” consists of nine arches including a large arched portico in the middle. The arched openings are enclosed in shallow decorative, cusped arches and horizontal construction of these arches is outstanding. If this mosque compared with the other Mughal architectures in India, certainly it is not as grand like other but it is really unique in Kashmir. The plinth of the mosque is very impressive, as lotus leaf coping on it and looks excellent. Also, this mosque does not have the traditional pyramidal roof that visually separates this mosque from other mosques in the valley. 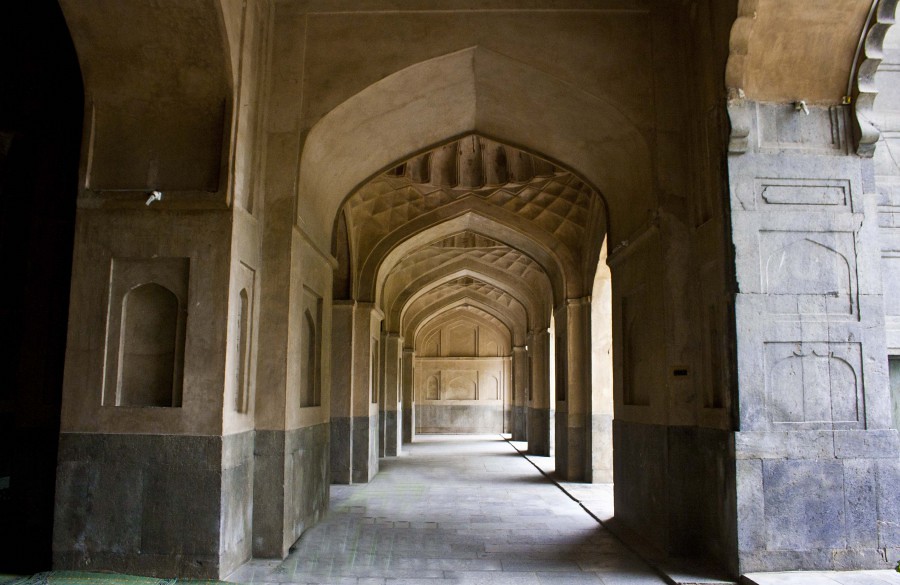 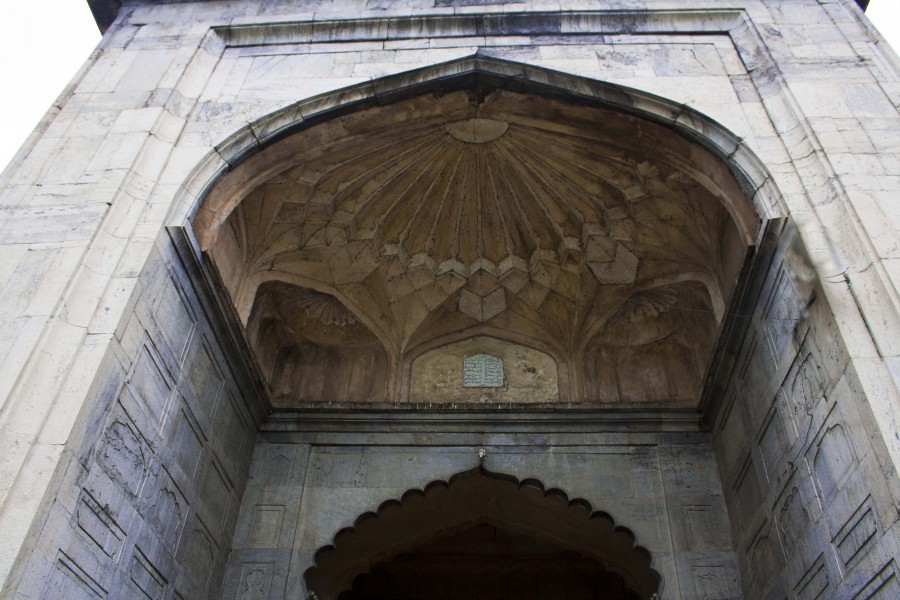 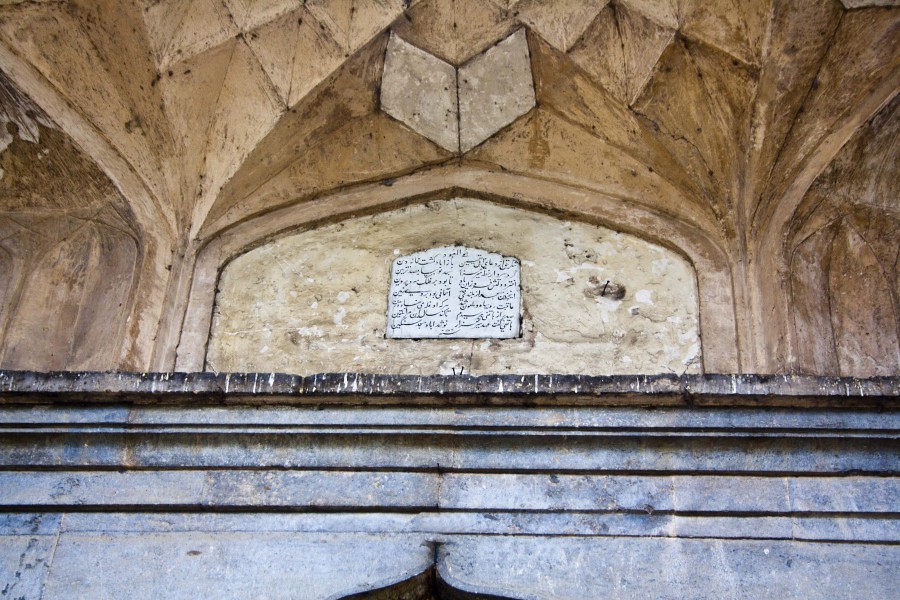 The mosque is unique in many sense, especially for the atmosphere. Although, why this beautiful mosque never used as a place of prayer, there is a very interesting story. Once a Mullah questioned to Empress Nur Jahan regarding the costs of its construction and instead of a proper answer, she pointed to her bejeweled shoe and replied: “As much as that”. The mockery was reported to Mullahs and this remark reached to all highly respected religious leaders of Kashmir. They unanimously decreed by the sacrilegious pointing  this mosque was unfit for any religious use. Henceforth, the mosque has never been used. It is a fact, comparison a religious place with a shoe was really unacceptable. I am really astonished, how a woman of seventeen century from Islamic clan passed such comment publicly.

There are other interesting stories behind this Masjid. (It is said), this was actually a site of an ancient Buddha Vihara. During the rule of Fateh Khan (1510-1517), a Sunni mosque was erected on () the place of Buddha Vihara. It is said Shia Empress of India Nur Jahan rebuilt it as a Shia mosque. In around 1819, Akali Baba Phula Singh defeated Jabbar Khan and Ranjit Singh captured Kashmir. Phula Singh was the military general of Maharaja Ranjit Singh. During this time Pathar Masjid was taken over by Maharaja Ranjit Singh and used as a storehouse. The military of Maharaja installed a cannon on the roof of Pathar Masjid to blown up Khanaq Shahi Hamadan which is situated across the Jhilam. Pandit Birbal Dhar intervened into the matter and saved the shrine.

How to reach
Mosque is situated 9Km away from Srinagar. There are several ways to reach the place.

By Road
Pathar Masjid is very well connected to Srinagar main town. You will get Rental Car/Bus from Srinagar. If you opt for rental car, in that case, you have to hire the car for a day trip and will cost you 1500 – 2000 (NonAC) approx. Bus will cost you only Rs 10 for one side or opt for shared car which is available from Dal Gate, cost you Rs 30.