First truth is there is sorrow in this world; Origin and cause of sorrow ………………

This is the first and second among four Nobel Truth (arya-satya-chatushataya) of life was expounded by Buddha in Sarnath.

Sarnath is a really a sacred place and I was there, part of my visit to Varanasi. King Asoka, Kings from Pala, Gupta Emperor, Hunas, still have the impressions of their foot prints, everywhere in Sarnath and anyone can sense the feel of ancient time. I was thrilled during my visit, every square inch is full of History. One visit is not sufficient to explore the place and demands adequate time to explore properly. But I had very little time in my hand and at the end I was so upset because I could not explore the place, the way I wanted.

Places to see in Sarnath

The Stupa: – Everybody is acquainted with the term Stupa. Stupa is a hemispherical or we can say dome like monument built with brick or stone. Building Stupas existed before Buddha but Stupas got specifically associated to Buddhism after Buddha. There are lot of theories, but Pre-Buddhist Stupas were actually used as burial mound. Buddhist Stupas were built, both indoor and outdoor as monuments. The indoor Stupas that were built are mainly votive objects and called Chaitya. 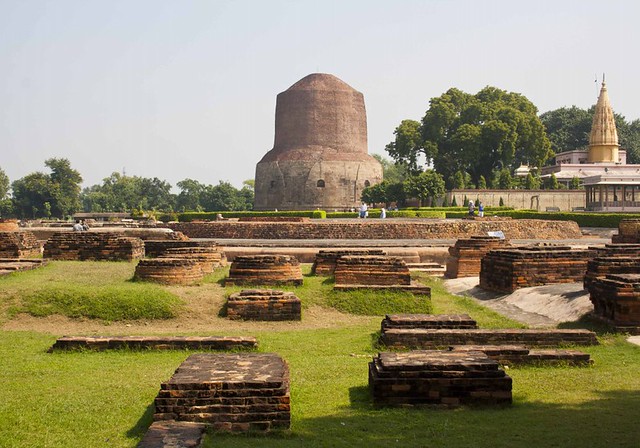 Buddha: – Buddha was born in Kapilabastu, to the king and queen of Sakya Kingdom and named Siddhartha Gautam. At the age of 29, He left the kingdom and adopted a life of wondering, meditation to understand the sufferings of human life. He attained enlightenment in Bodhgaya and reached Saranganath or Sarnath to teach the same to others. In Kusinagar he left his body. That mean, Kapilabastu, Bodhgaya, Sarnath and Kusinagar are the prime pilgrimage sites for the Buddhist around the globe. 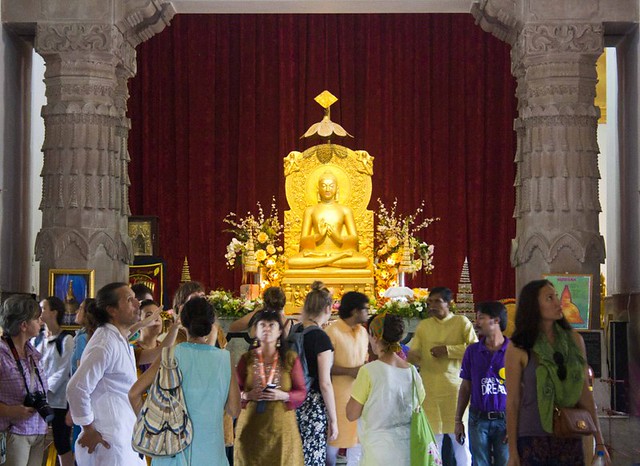 1. Dhamekha Stupa
Dhamekha Stupa is over 100 feet high and over 90 in diameter. believed to be commemorate the site where Lord Buddha preached his sermon to his five disciples. In 1835, Archeologist Alexander with the help of ASI (Archeological Survey Of India) bored the stupa from the top and he found a stone slab inscribed characters from 6th century. Dhamekha Stupa are carved with scenes from  Lord Buddha’s life, some geometrical patterns, bands of lotus creepers. 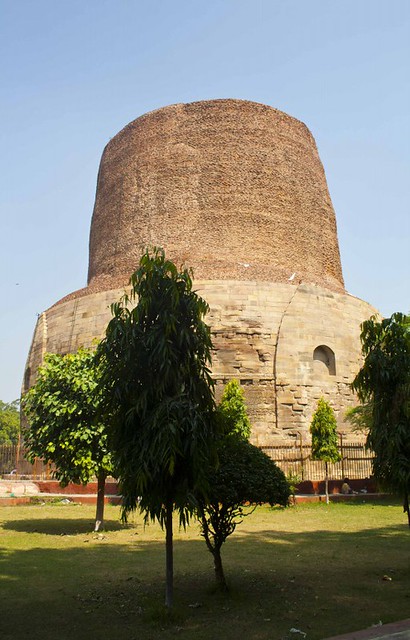 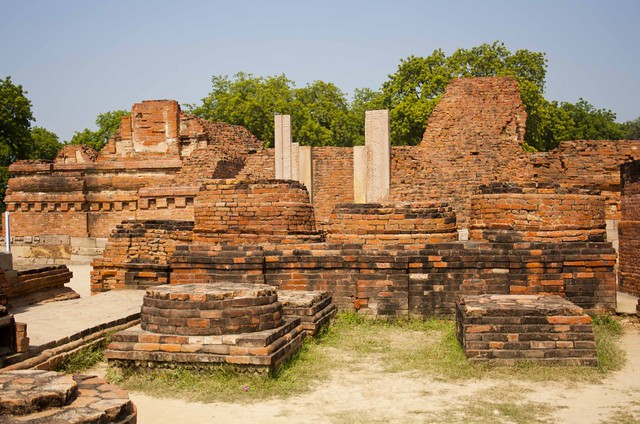 3) Deer Park
The compound is very calm and quite, if you want peace, this is the best place to relax. This is also a big compound with garden and compound for the deers to roam around freely. Here you can see different kinds of birds.

4) Mulghandha Kuti Vihara Temple
This temple is built by Anagarika Dharmapala (1864-1933), who bornned to a aristocratic Buddhist family in Sri Lanka.  He founded Mahabodhi Society of Sri Lanka in his home country. The main aim of the society is to preserve the Buddhist site, as well as develop and popularize Buddhism in both Sri Lanka and India. This temple follow Theravada tradition. 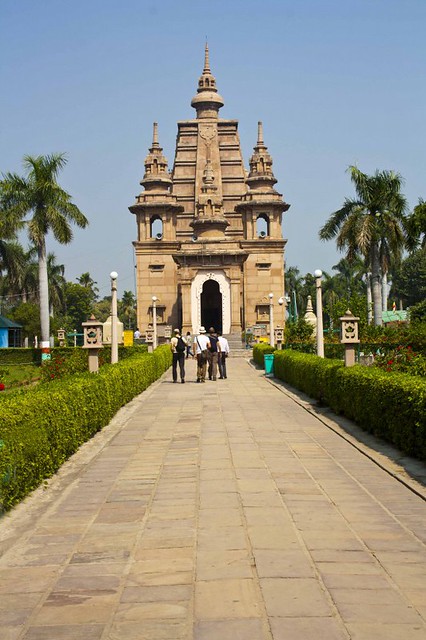 5) Tibetan Temple
It is also a new temple and built in 1996 with the donations by Tibetans. This temple filled with idols of Buddha, Mara, Maitreye and other deities and this temple follows Vajrayana tradition.

6)Thai Temple
A Buddhist monk name Badant Shashant Rashmi built this temple in the year 1976 and its follow Theravada tradition.

7) Jain Temple
This temple was built for Jain religious leader, Jain “11th Tirthankar”  Shreyamsanath in the year 1824. This is really a beautiful temple and paintings of life of Mahavira line the the wall of temple.

8) Korean Temple
You can also visit Korean temple, it is new temple in compare to other temples in Sarnath. It is built in 1996 and this is Mahayana Temple.

9) Chinese Temple
This is also Mahayana Temple and built in 1939. This temple is built by abbot of Beijing Tao-Kai and Fa-Yuan-Tsu.

10) Japanese Temple
Dharmachakra Indo-Japanese Society built this temple in the year of 1986 and its follow Mahayana tradition.

11) Saranganath Temple
Some scholars says the name Sarnath comes from Saranganath. Saranganath , the “Lord of the Deer” and this temple is believed to be occupy the site of a ancient shrine dedicated to Lord Shiva as Saranganath.

12) Mahabodhi Society Temple
This is really a beautiful temple and inside the temple there is a Museum and a Library that have old photographs, Journals, books. This temple is built in 1922 by Mahabodhi Scciety and it follows Theravada tradition.

13) Archeological Museum
Archeological Museum at Sarnath set up in 1910 and is oldest museum of Archeological Survey of India. Complex of the museum in size is small but contents is very fascinating. There are five galleries in the museum. There is a book store of ASI at the entrance of the museum. If you planned for purchasing books of ASI, this is the best place to buy books from the store, because here you will get 30-40% discount on books.
Contents displayed in five galleries is a little portion of the total collection, major portion or rest is kept in the storage.
Gallery 1 – Here displays various standing of Buddha and Bodhisattva and a panel shows life’s of Buddha.
Gallery 2 -Two images of mythical animal, voluminous Tara and Buddha images include  Bodhisattva  Padmapani (Buddha holding a Lotus). Last piece of Kamaradevi’s inscription.
Gallery 3 – Walks into the gallery 3, you will confront Ashokan Lion Capital of Sarnath. It is sculpted in a single block of black sandstone from Chunar. It is two and half metres high. Ashokan Lion Capital was adopted as India’s national emblem, in 1950, 26th January. Behind this national emblem, there is huge standstone statue of standing Buddha.
Gallery 4 – There are five wall cases, displays pieces of Birds, Animals, Human heads, Gupta’s period bricks, some figures of Terracotta figurines.
Gallery 5 – Here displays Bhramanic sculptures includes Parvati, Shiva, Vishnu, Ganesh and as well as Agni. 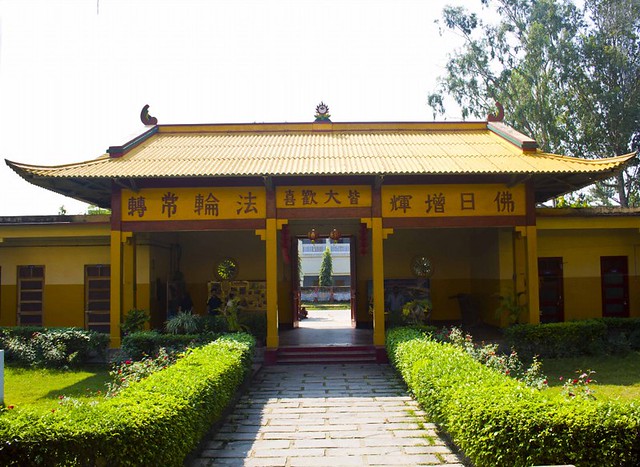 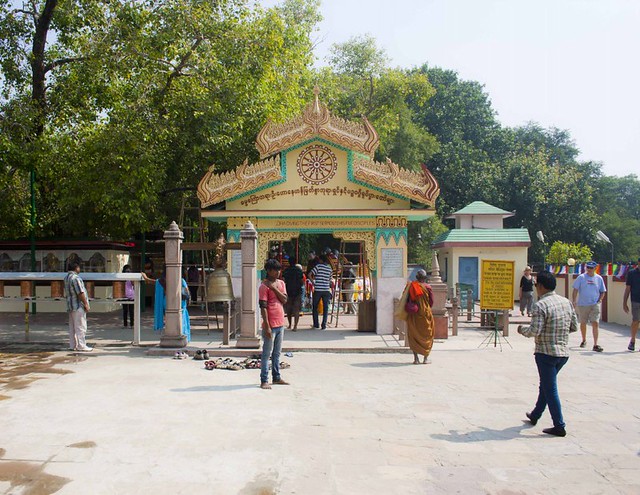 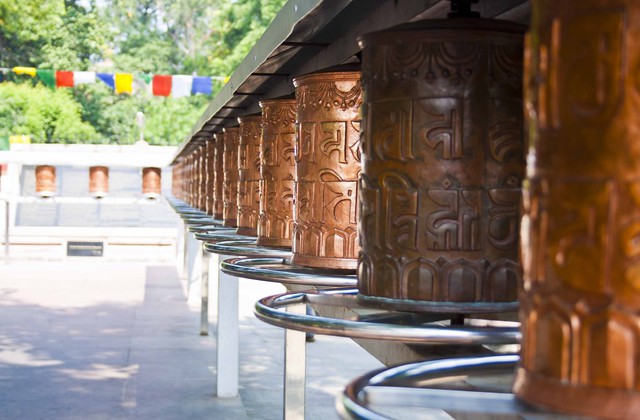 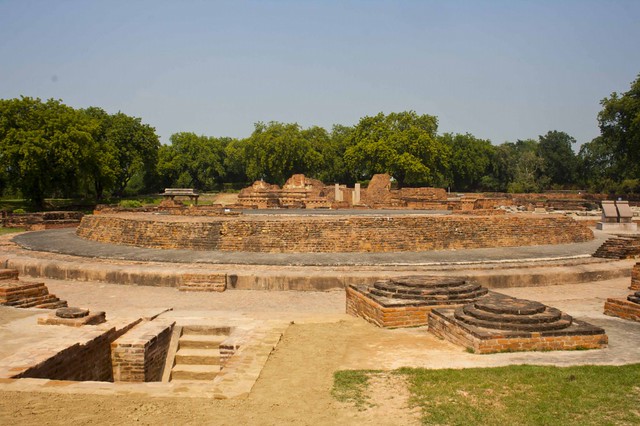 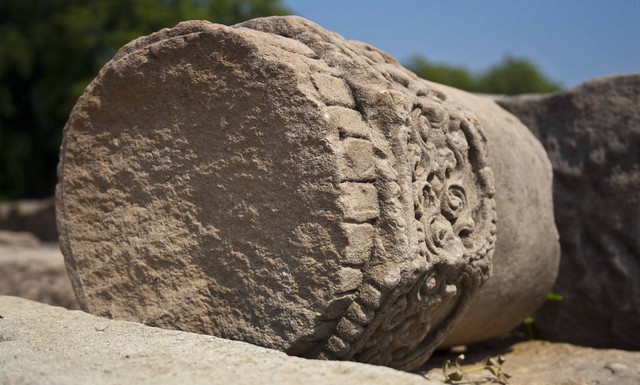 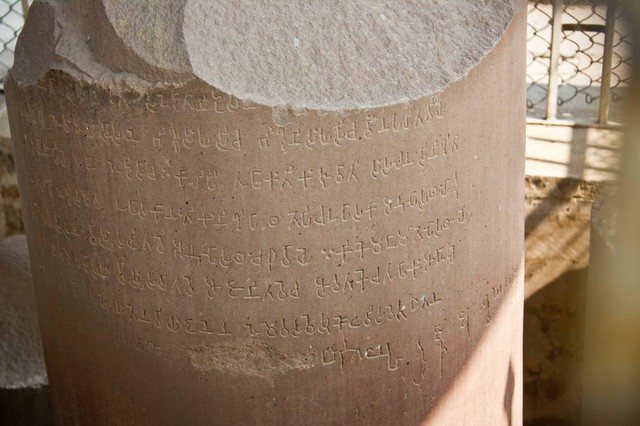 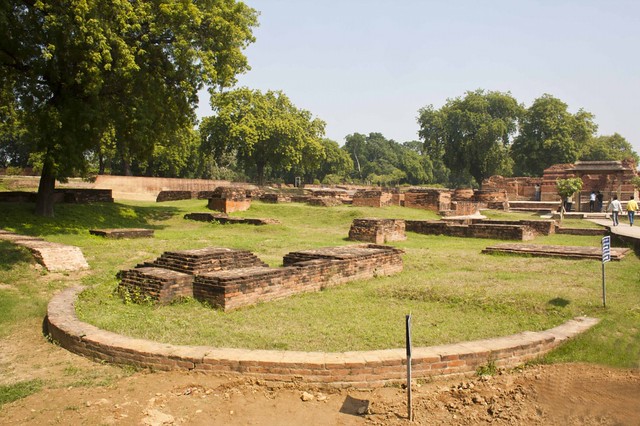 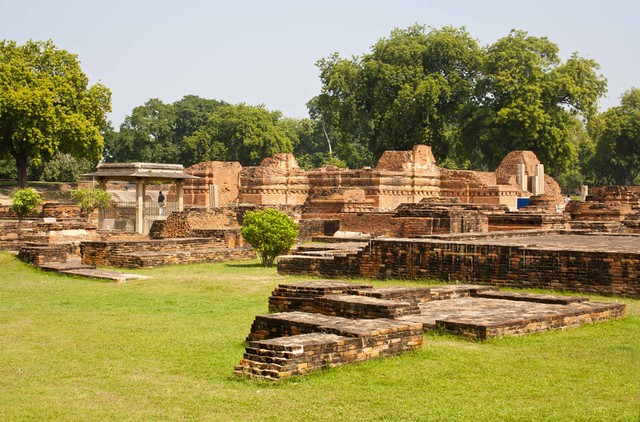 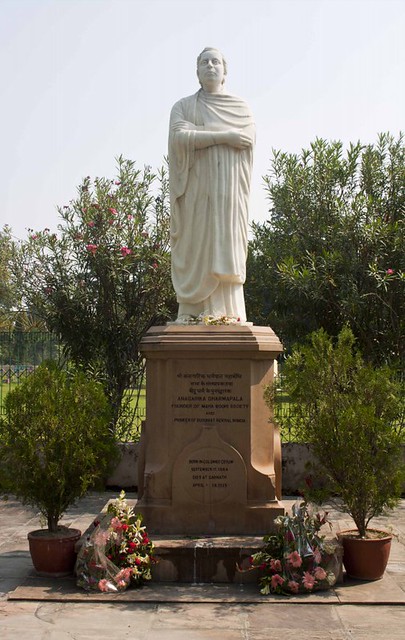 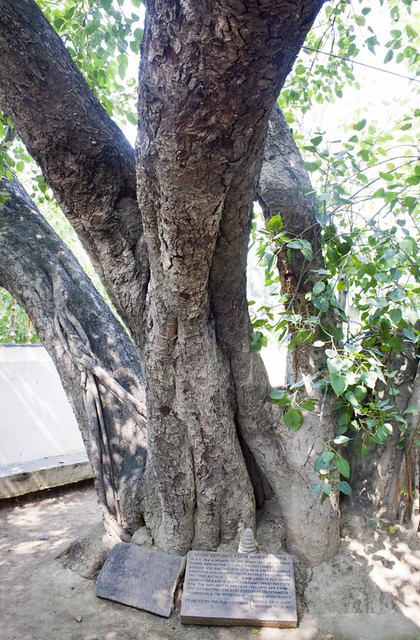 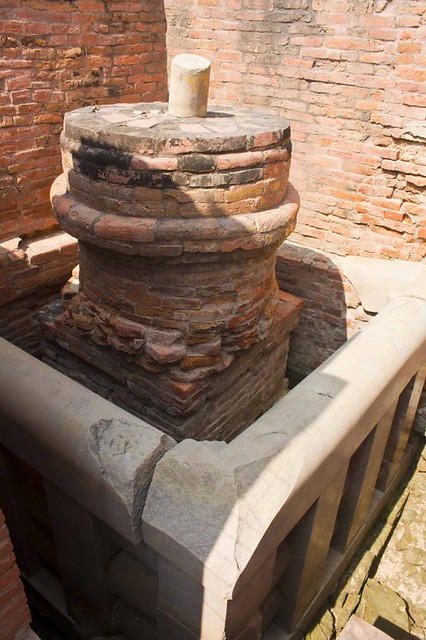 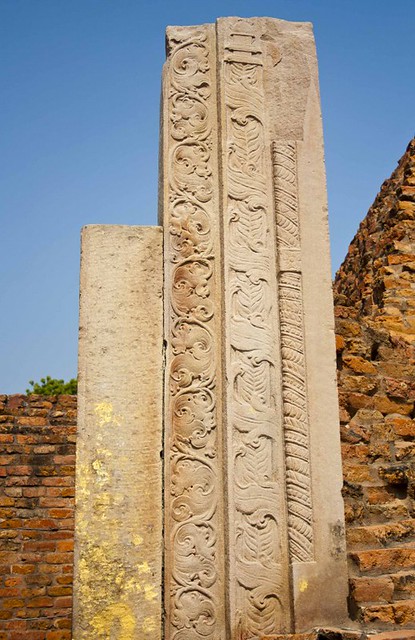 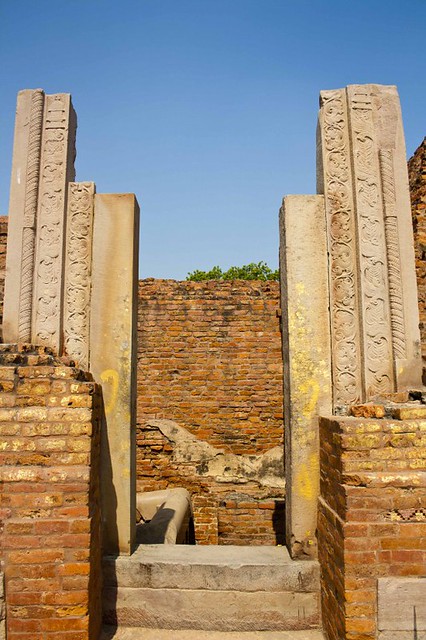 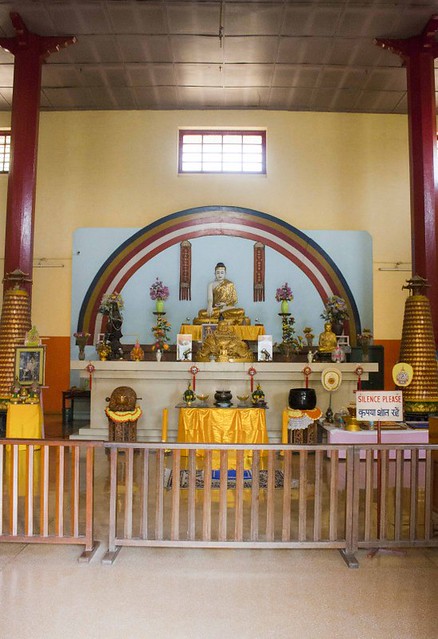 To Get There
Nearest Railway station is Varanasi. Sarnath is just 10-13km away from Varanasi. There are local buses, Autorickshaw, or Private cars to reach Sarnath from Varanasi. Buses are so cheap, Autorickshaw usually charge 1000 Rupees for a day trip, Car rental is varies from 1500-2500 Rupees.

Stay
There are guest houses in Sarnath. One can even stay in surrounding monasteries. But people stay in Varanasi and come down to Sarnath for a day trip. I wanted to stay in Sarnath but could not, just others with me are not agreed on it. Normally Monasteries charges you 100-150 Rupees for stay.