Your Next Weekend at Lonely Vanishing Beach Chandipur 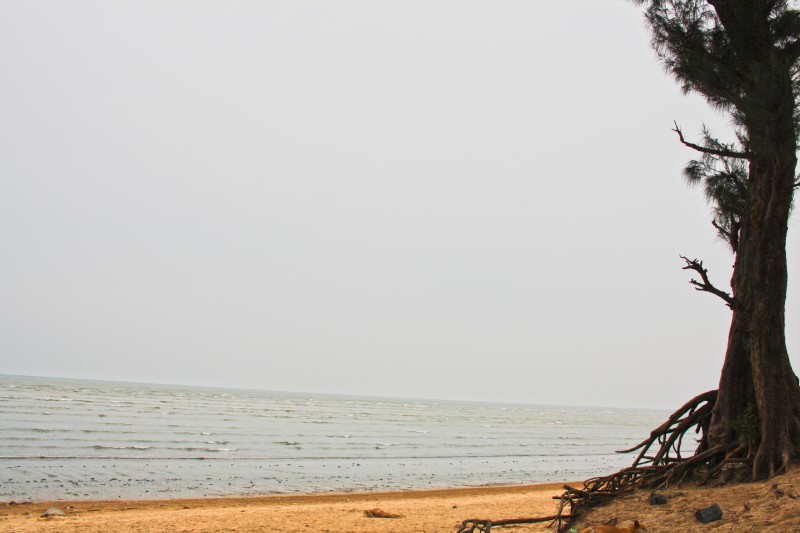 It was 3:30 AM, my phone rang. It was a wake-up call for me from Debabrata. Working late night is okay with me but leaving the bed on early morning always a tough job. Never use an alarm, my wife work as an alarm for me. After so much of procrastination, finally, I managed to wake up at 4:30 AM. My breakfast was ready and served. My wife supports all kinds of wild madness of me. Unless she was there with me, instantaneous travel was impossible for me. Although, I had to catch up Dhauli Express from Howrah for Balasore.

I reached Howrah at 5:25 AM and managed to buy a local ticket after standing in a long queue. Almost I missed the train but got on in a running train. Debabrata was kept on checking my status. Around 6:40 AM I got a call from him and asked me to check my laptop. Switched on my laptop and internet as well to check mails. I called up and informed him about the status of my camera. He smiled and told me that he arranged everything for the trip. At 9:45 AM, I reached Balasore and found ever smiling Debu at the station. We sat at the station and finalized the plan of action for the work. We hired an auto from the station compound and reached DRDO (Defence Research and Development Organisation) by 10:30 AM. It was a semi-official tour for me and I finished my job as quickly as possible. I was so eager to see the magical beach. 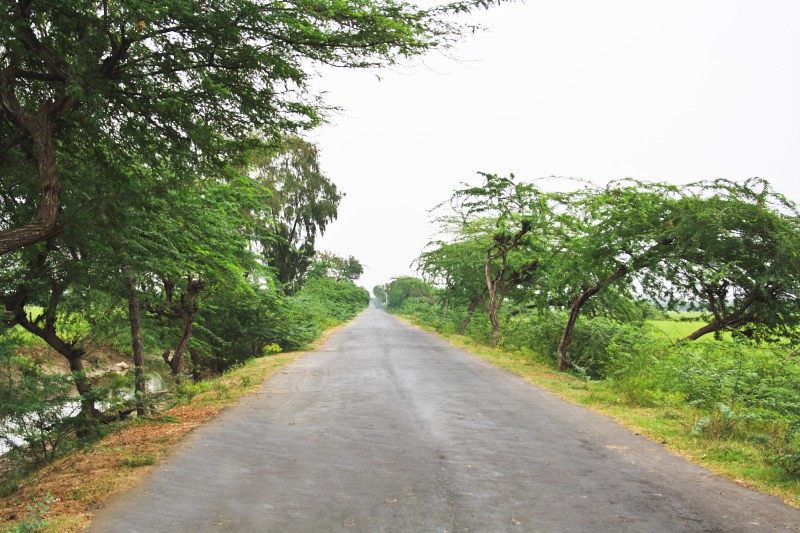 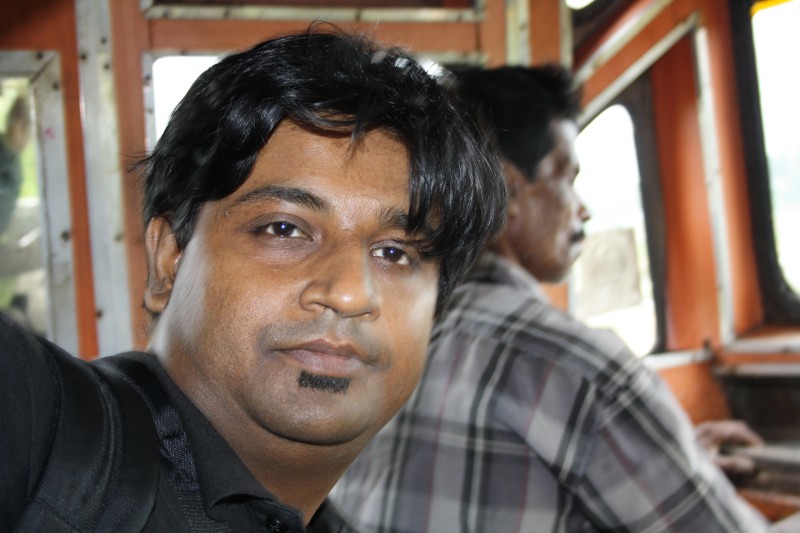 His arrangement of everything was a completely false statement. After walking for a half an hour under the scorching sun, there were no traces of any vehicle. He stopped a lorry and asked for a lift. This was the first time I traveled in a lorry to reach a travel destination. The temperature inside the driver’s cabin was reached to the boiling point. It was pathetic but now I feel it was an experience. The driver dropped us at an unknown place and there was no trace of any sea beach. Crossing some narrow lanes and by lanes, we reached the beach but there were no traces of any sea. I asked a passer-by fisherman about the location of the sea and he said “Vanished”. He suggested us to wait for few more hours. 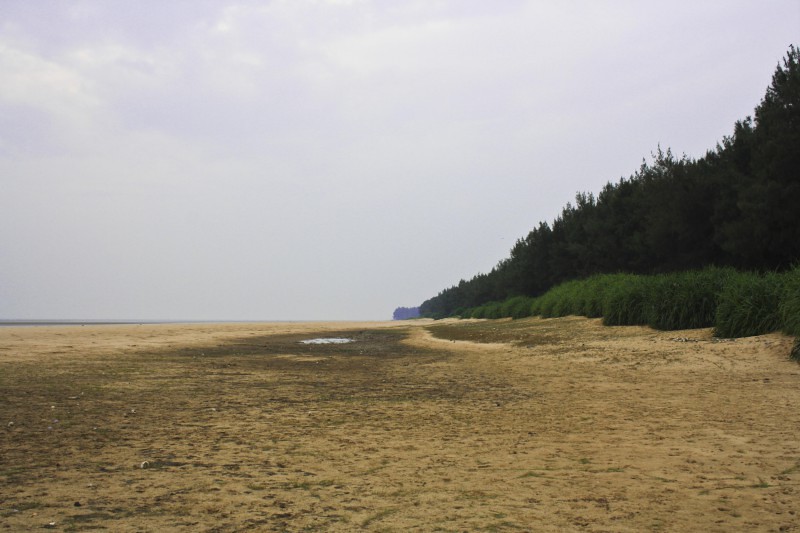 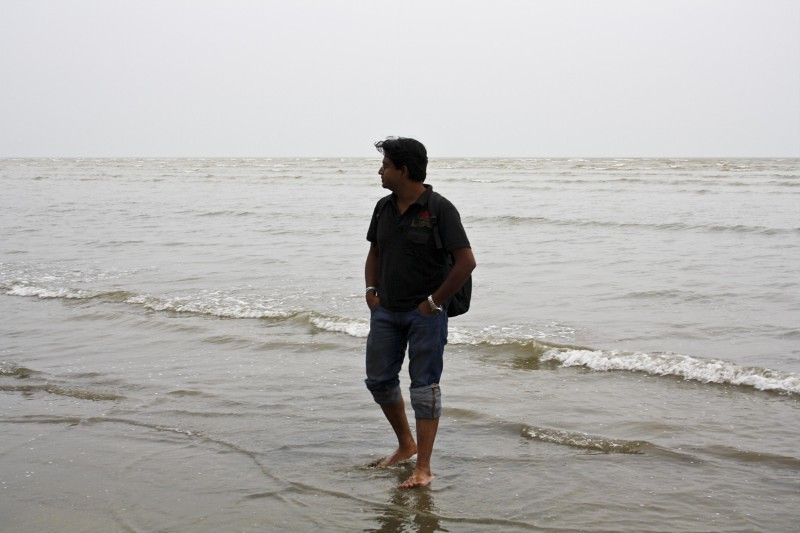 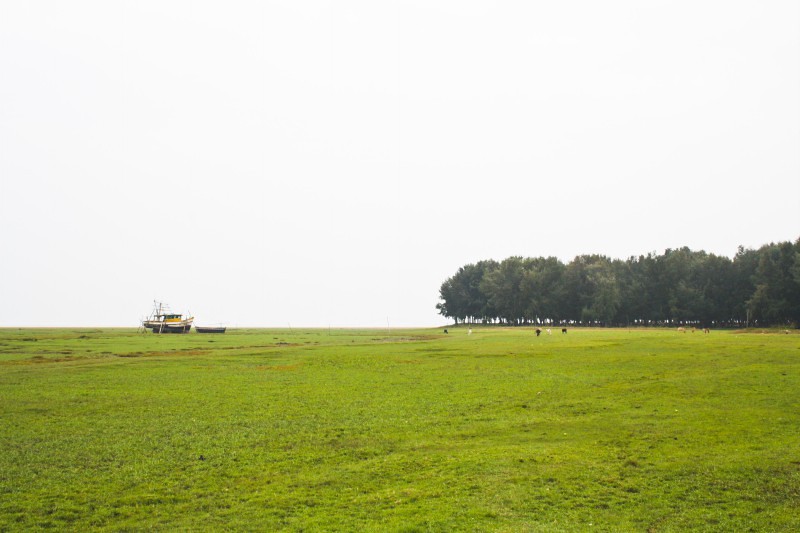 We started walking on the beach to locate the sea but there was no trace of a single drop of water. I was completely frustrated. Suddenly I noticed red spots on the beach. Oh my God, there were thousands of thousands of red crabs. Earlier, I saw red crabs on Talsari beach but not in huge number. Few minutes of walking we reached the colonies of red crabs. I could wait for the sea to come back but could not resist myself to play with the red crabs. Crabs were smart and faster than us, they were also not camera friendly. So neither I grabbed a single one in my hand nor I captured them in my cam. Debu went there many times and he was quite acquainted with the place. He informed me that Chandipur is also popular for “Horse-Shoe” crabs. Please don’t think that he knows everything about the place. I had some knowledge of historical facts about the place and I showered the same on Debu.

Now it’s the time to shower the same on all of you. Popular Indian freedom fighter Jatin Chandra Mukherjee (Also known as Bagha Jatin) was shot twice by the British Army in Chandipur and he managed to escape from the spot. He swam across the river (Budhabalanga River) and reached to Barabati Village. Where a doctor operated on Bagha Jatin to take out the bullets from his body. There was a place called Chashakhanda village where freedom fighters used as a hideout and to store ammunition. After a while, he managed to reach that village but unable to find the door key of the house. Unfortunately, due to excessive bleeding, he fell unconscious and British Army arrested him from the spot. An episode of thoughts about the freedom fighters engrossed me for some moments. 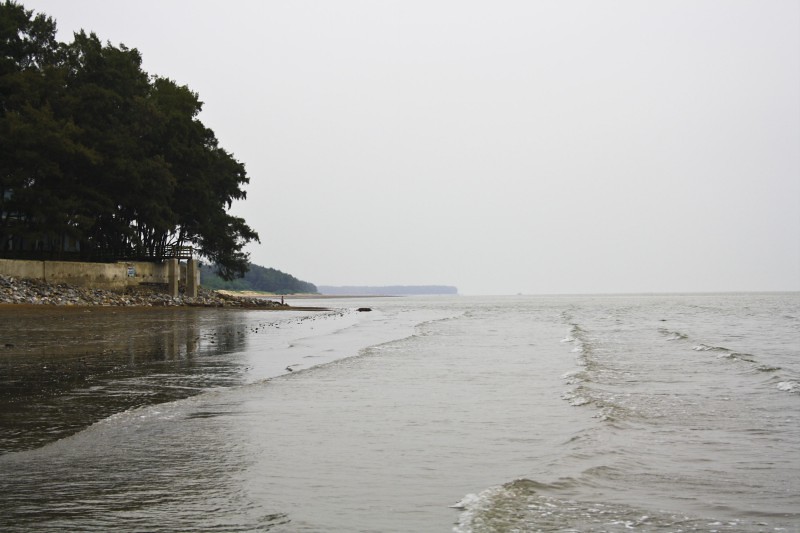 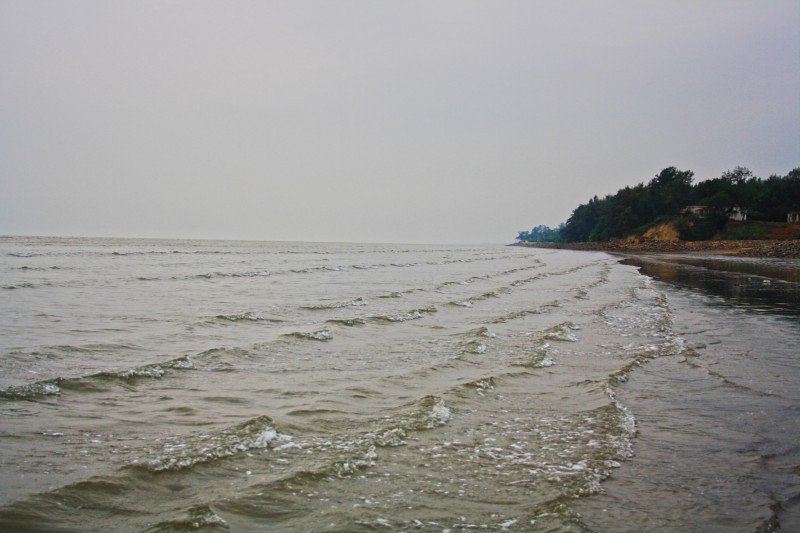 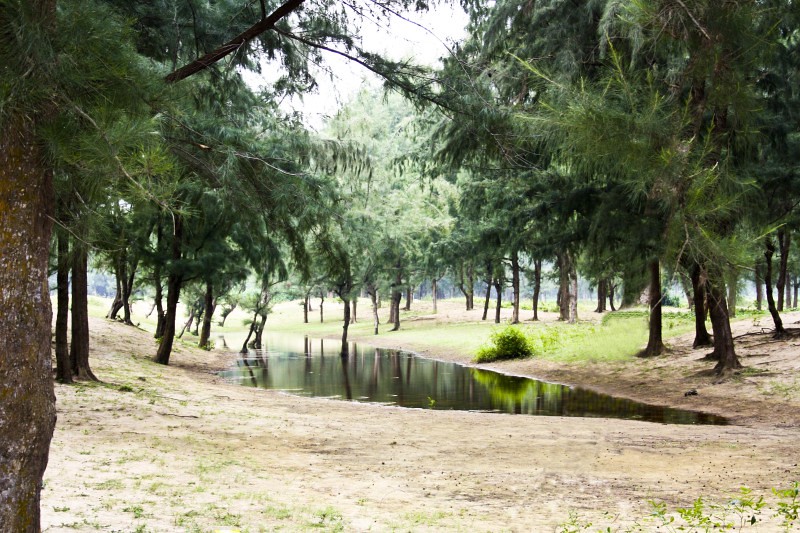 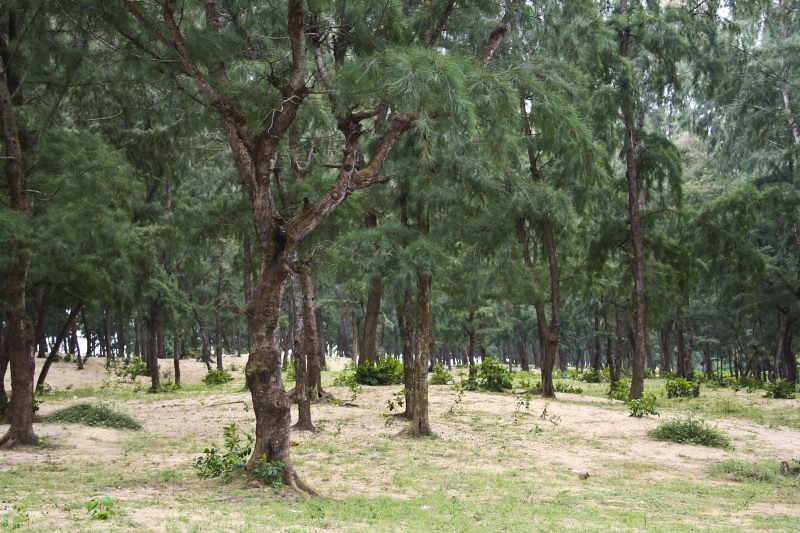 Let’s get back again to our trip. There were only two living souls on the beach and we felt so lonely. It was 3 PM and we were also hungry. Accordingly, we started searching for a good place for lunch. We had our lunch and went back again to the beach. Suddenly, I noticed waves which were far away from us. As time grows, I saw a full-fledged sea near me. I witnessed the moment, how a completely dried out beach transformed into a sea. Basically, everyday during ebb tide the sea water recedes approx 5 KM from the beach and advances to the shore during high tide. It is truly unique and fascinating sight. If you would be there during and after the tides, you can watch the sea vanishes right in front of your eyes and its return. We enjoyed thoroughly and played with the water. I wished to swim but couldn’t as there were no extra clothes with me. There was a Casuarina jungle alongside of the beach and we stroll there for sometime. Then we went to a nearby village called Balaramgadi and spent some time there. It was 8PM, there was no plan to stay there. I bid goodbye to Chandipur and boarded an overcrowded Howrah-bound train. I reached home around 4AM. 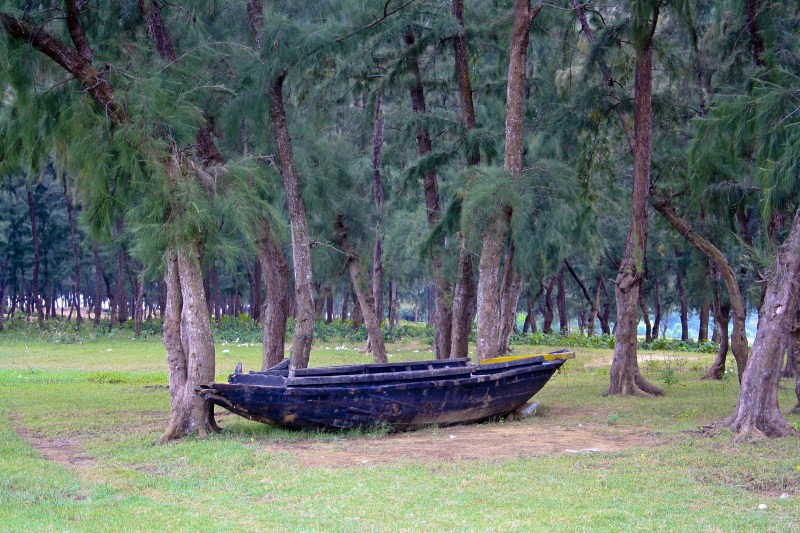 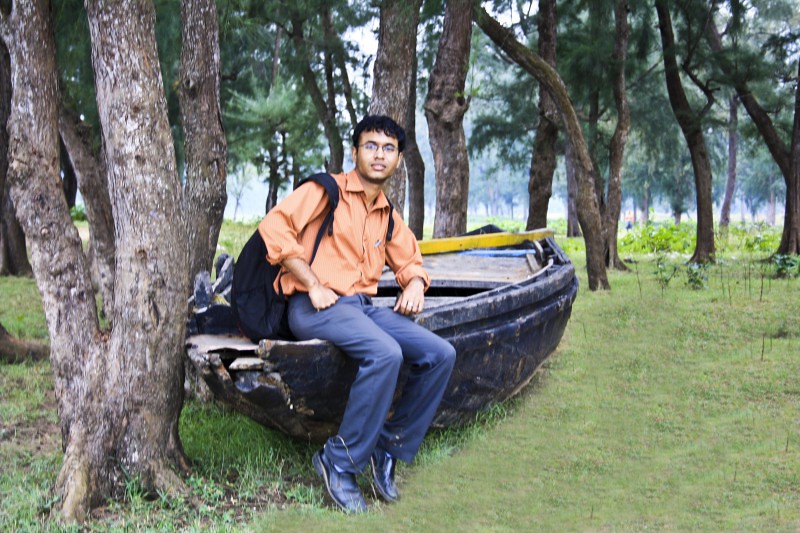 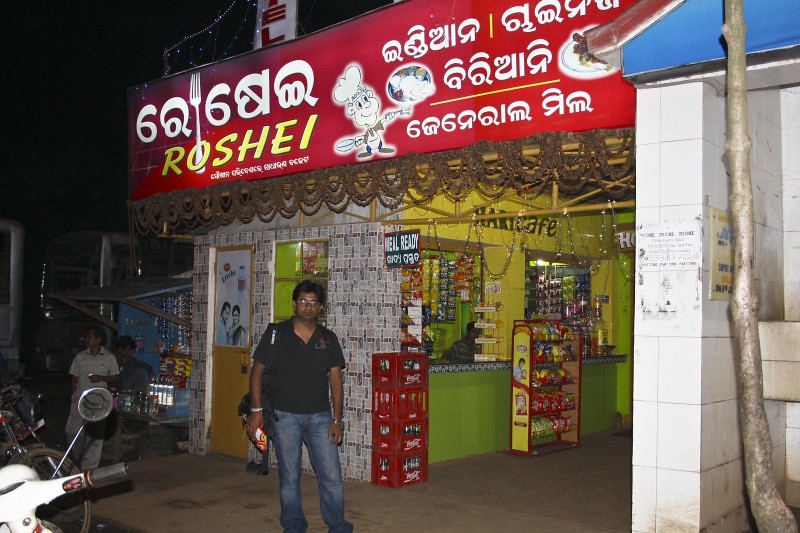 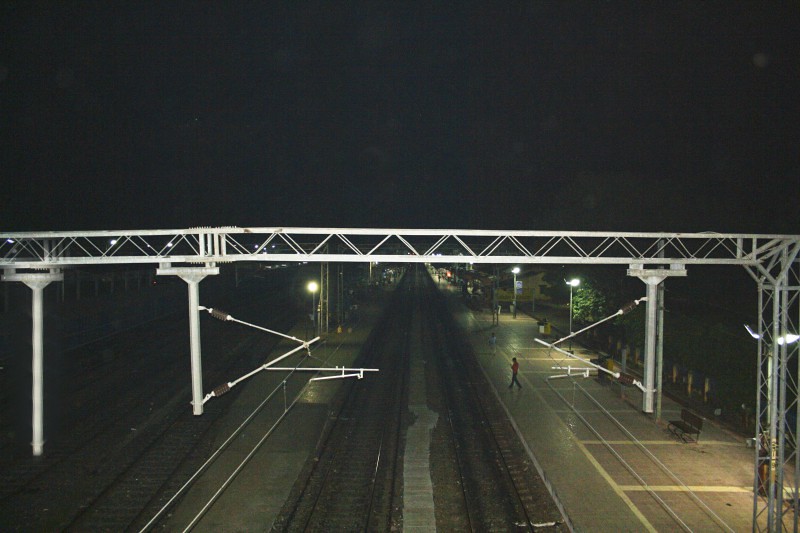 A) Balaramgadi Village
If you like fishing, must visit Balaramgadi Village. It is located near to the beach merely 2 KM, at the confluence of Budhabalanga River. There is a big fish market in the village and fresh sea fishes are available at cheap price. This place is popular among locals and tourists, especially for fishing and boating. Apart from enjoying fishing and boating, one can enjoy the scenic beauty of the village. 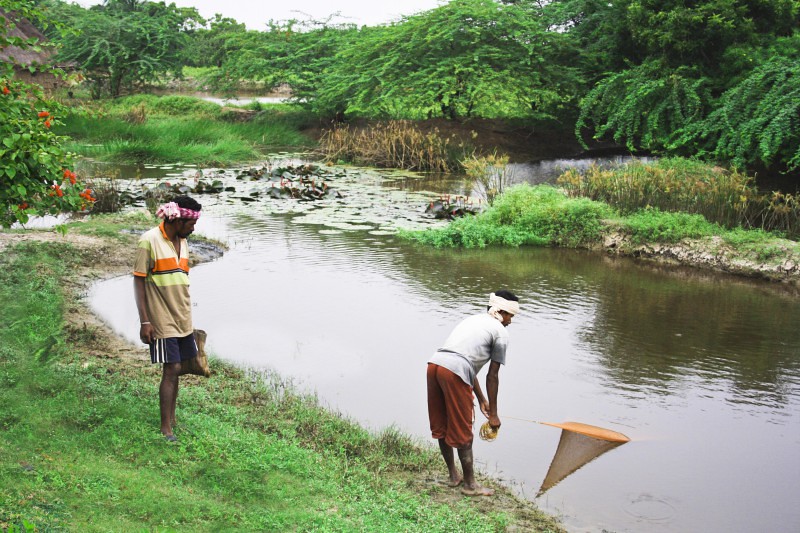 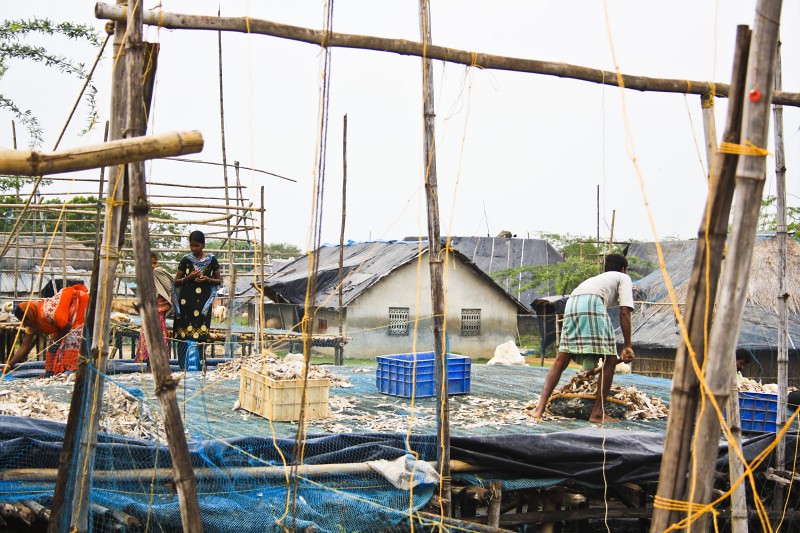 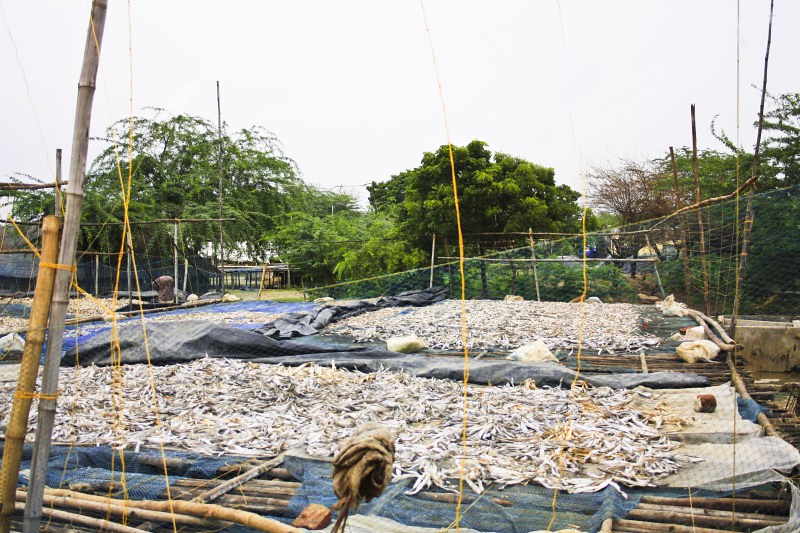 B) Sonarpur Chowk
Sonarpur  Chowk is a marketplace and situated at a distance of 1 KM from Chandipur Beach. If you want to buy local handicrafts or ornaments made of seashells at a cheap price this is the best place.

C) Beach Festival
Beach festival is organized in almost every beaches in Odisha and Chandipur sea beach is not the exception. The festival which showcases the heritages of the area held in an open area.There is no fixed time for this festival.

Places Near to Chandipur

A) Panchalingeswar
Panchalingeshwar temple enshrined five Shiva Lingas and it is situated on the top of a hillock near Nilagiri Hill. It is believed that Shiva Lingas have been enshrined by Sita (Wife of Lord Rama) during their banishment. A stream regularly washes Shiva Lingas as it flows over them. A lake is formed by Devkund waterfall, which is also a major attraction of the place. You can explore the Nilagiri (Not Nilgiri)
Forest on foot.
This place is 30 KM away from Chandipur beach. Autos and private cars are available from Balasore station/Chandipur beach. Cost you Rs/- 150 to 200 for Auto and 500-600 for the car. There are not many options for accommodation. So if you have the plan to stay there booked the hotel in advance.

Kuldiha forest is situated in the district of Balasore in the state of Odisha and around 80 KM from the Balasore station. The forests of the region cover the Nato hills and the Sukhupata hills linked with the Similipal National Park. This is one of the major wildlife sanctuaries in Odisha. This forest is the home of wild animals like the elephant, tiger, and bison and also houses of birds. Prior permission is required for the visit.

Hotels in Chandipur
Chandipur is surrounded by Hotels and accommodations are easily available except any special occasions. All kinds of Hotels are available in Chandipur, from Cheap Hotels to Luxury hotels. If you are visiting in normal weekdays, must bargain for the rates.

Location
Chandipur is a seaside beach situated on the northern coast of Odisha (Orissa) along the Bay of Bengal. Balasore is the nearest city and also an important city, having historical significance. The place was a part of Kalinga (An early kingdom in central-east India, comprised of maximum part of Odisha, some parts of Andhra Pradesh and Chattisgarh) and was invaded by the Mughals. In British-India it was developed as a port city. Balasore is situated 255 KM from Kolkata and 207 KM away from state capital Bhubaneswar.

By Road
Chandipur is well connected to Kolkata and there is several options are available like Luxury Bus/ Budget Bus/ Car rental service. It takes around 5-6 hours by bus and 4-5 hours by Car to reach Balasore from Kolkata.

By Airport
The nearest airport is Biju Patnaik International Airport located in Bhubaneswar (Capital of Odisha) is about 207 km away from Balasore (also known as Baleshwar).

By Train
The train is the best option for Chandipur and well connected to all major cities of India. Balasore is the nearest railway station, which is  just 16 KM away from the Chandipur beach. If you are traveling from Kolkata, try for early morning trains, preferably, “Dhauli Express”. 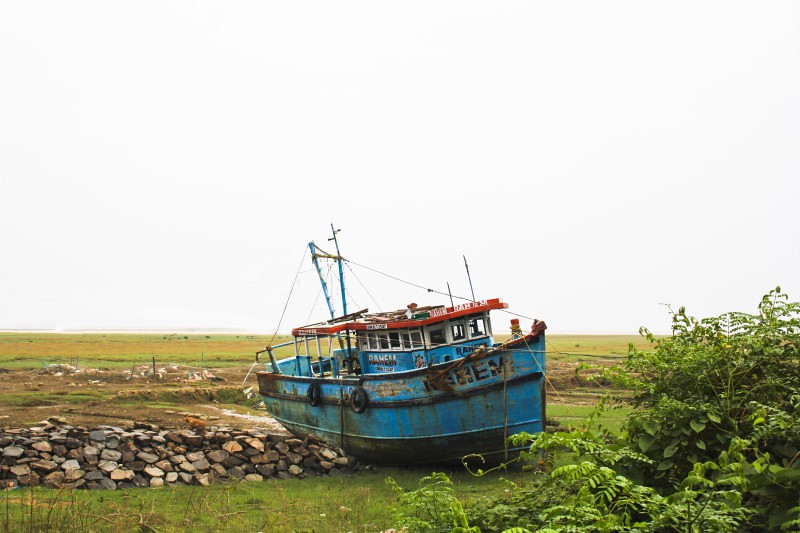 Special Thanks to Debabrata Sen for the trip.