Kashmir Diary: Roza Bal – Is It Really the Tomb of Jesus Christ? 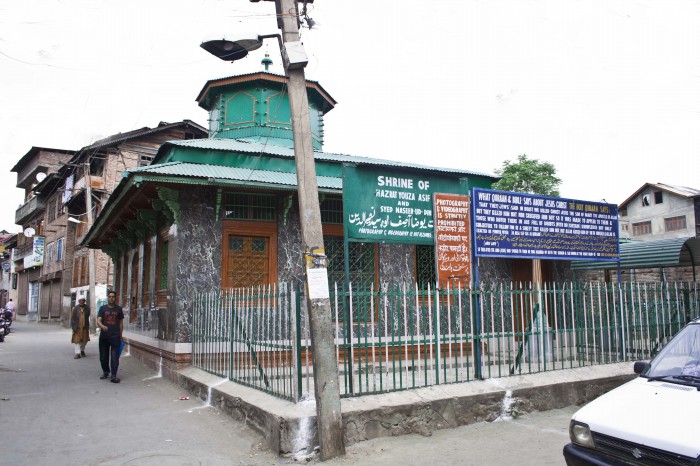 My Visit to Roza Bal

Recently, after my Amarnath Yatra 2016, to explore the heritages of Srinagar I stayed there for a couple of days and visit the place called Roza Bal or Rauza Bol was on top of my list. Now I don’t understand, where and how do I start to write about this place. Because of the vastness of the subject and also it is an extremely controversial place.

Finally, on 3rd July 2016, I reached Roza Bal, which is located in the middle of Srinagar’s old town, Anzimar in the Khaniyar area, which is around 2Km from Khaniyar crossing and near to Bohri Kadal. It was in my knowledge that visitors are not permitted inside the shrine and also photography is strictly prohibited. I found a board in front of the shrine, clearly mentioned that photography is strictly prohibited but I could not resist my photographer instinct. Hastily, I have started taking photographs and captured three photographs of the shrine from outside. It was also in my knowledge that the controversial tomb of Jesus Christ can be viewed from the window. Without wasting much of the time, I enter my camera lens through the window and captured two photographs of the tomb. Suddenly, a group of (8-10 people) indigenous  people cordoned me and literally, snatched my camera and started questioning me. After few minutes, they decided on their own that they would hand over me to J&K Police. Seriously I was scared and for that reason, I repeatedly apologized for my deeds. I don’t know what happened to them, they told me to delete those photographs then only they would let me go and I deleted those photographs in front of them. Although, after reaching my hometown I have restored all the deleted photographs from the memory card. They asked me about my next plan and I said straight away to them “now I will go back to my hotel”. But there are other plans in my mind and according to my own plan, I would visit an another controversial place of Srinagar. I simply flew away from the spot. 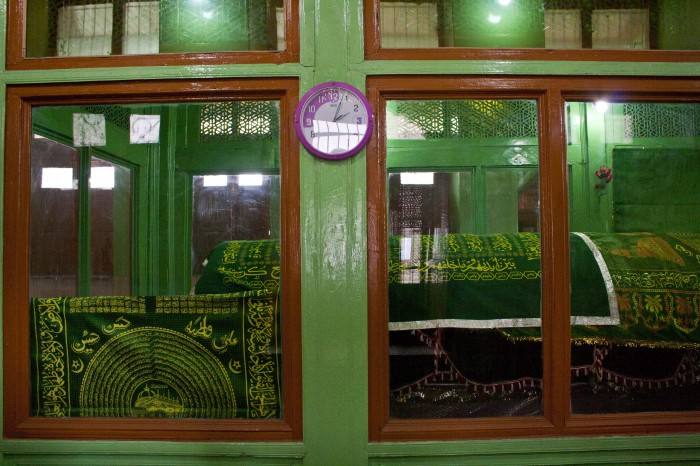 What Made Me Curious

I read a book named “Proribrajok Swami Abhedananda – Kashmir, Amarnath O Tibbet Bhraman” by Swami Abhedananda during my college days. Swami ji mentioned in his book about Dr. Notovich a Russian traveler, who finds some handwritten documents in the Hemis Monastery in Ladakh, near Leh, which proves that Jesus was traveled to India. A monk showed him the manuscript in the Tibetan language during his visit to the Hemis Monastery in 1922. The monk told him that it was an exact translation of the original documents which could be found in the Marbour Monastery near Lhasa and written in the Pali language. He able to read and translate it, which he discussed in his book. That much of the information was enough to make me curious about Roza Bal, Kashmir, and Jesus in India.

Suzanne Olsson, who claiming to be Jesus Christ’s ‘59th descendant arrived in Srinagar in 2002 and seeking DNA testing of the controversial tomb. What happened after, I don’t have any idea but this incident again made me more curious.

A few years back I saw a documentary film called “The Rozabal Shrine of Srinagar” on the same subject featuring Dr. Fida Hassnain (He has written several books on the life of Jesus Christ and Roza Bal).

Ashwin Sanghi’s Book “Rozabal Line”, “The Da Vinci Code” by Dan Brown (Also I saw the Movie) and “The Unknown Life of Jesus” by Nicolas Notovich, enough to make me mad for Roza Bal. 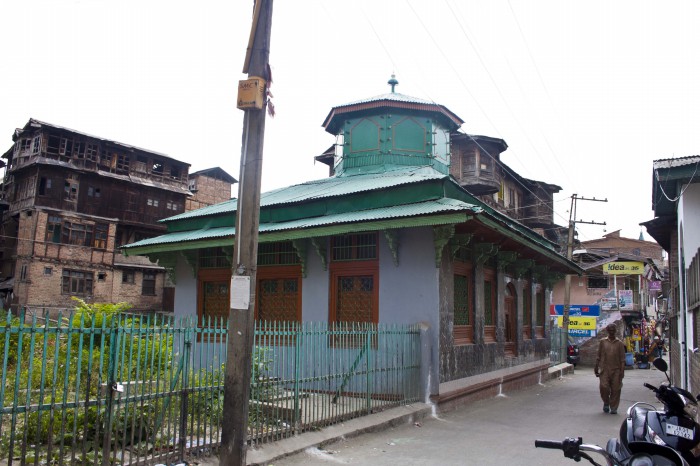 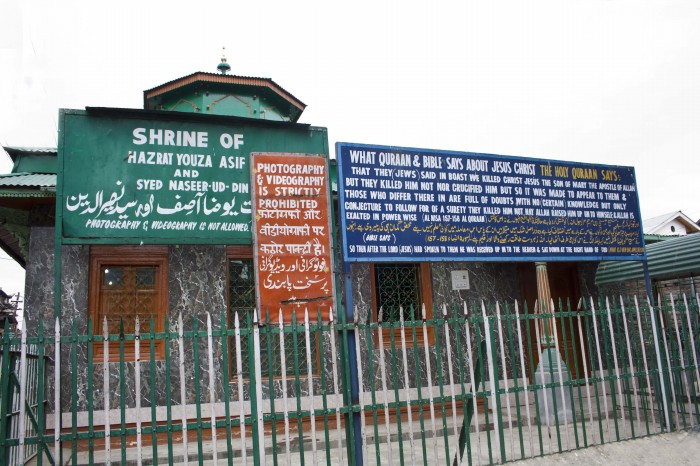 Some Information About Roza Bal

There are two tombs inside the Roza Bal (which is small wooden mausoleum) one tomb is of Ziarati Hazrati Youza Asouph or Yuz Asaph (or Asaf) and another grave is of Syed Nasir-u-Din (Islamic saint, a descendant of Imam Moosa Ali Raza, said to be a great devotee of Jesus, who buried here in 1451).

As per some ancient records, that indicate that the grave of Youza Asouph or Yuz Asaph (or Asaf) is to be as far back as 112 CE.

The Hebrew name of Jesus was Yuza, in Arabic or in the Koran his name was Hazrat Isa or Isa and Issa in Tibetan. Farhang-Asafia, which explains how Jesus healed some leper and then became Asaf (purified or healed) and the word Yuz mean “Leader”. Yuz Asaph or Youza Asouph mean “Leader of the Healed” which pointed to Jesus Christ.

The grave of Yuz Asaph also points east to west, according to Jewish tradition but the Muslim tombs are always points on the north-south axis.

The inner chamber of the grave of Yuz Asaph, there is a stone with the imprint of two feet showing what appear to be nail wounds. The wound on the left foot is round shaped and the wound on the right foot is an arc-shaped. As all we know that from his crucifixion Jesus would have suffered the same.
It is a custom to place candles around the gravestones and when Dr. Fida Hassnain removed the wax, he discovered the footprint, also he found a cross and rosary. Many people feel that these are the signs for the identity of who is buried in Roza Bal.

The crucifixion of Jesus Christ is also mysterious. People die on the cross by starvation or suffocation. When the ribs of the crucified person press down on the lungs that made the person no longer to breathe and that may take several days. Jesus was nailed to the cross in the early afternoon of a Friday and taken down from the cross after four or five hours. Every year in the Philippines and Mexico there are commemorations of Jesus’ crucifixion where people are crucified on their own wish. They survive very easily. So it is most usual that Jesus was alive after the crucifixion.

Also, some records point his presence and some names of places that also relate his presence in Afghanistan and Pakistan. The Acts of Thomas describe the journey of Jesus and Thomas in Taxila (Now Pakistan) at the court of King Gundafor in the 26th year of his rule. That would be about 47 CE.

When Jesus came to Kashmir, he came with a group of followers and along with his mother “Mary”. During that time Mother Mary was too old. There is a small town called Mari, or Murree which is situated 170 kilometers west of Srinagar on the border of Kashmir near Rawalpindi. In this town, there is an ancient grave called Mai Mari Da Asthan, which meaning is “The Final Resting Place of Mother Mary”. This tomb is also in Jewish style, aligned on the east-west line. Before Jesus Christ reached Kashmir, she would have died. Still today the grave is maintained by Muslims as the resting place of Jesus’s mother. It is said that after the death of his mother Jesus traveled to Ashmuqam from the pass now called Yuz Marg, which is near to Pahalgam and reached to Srinagar.

I read a news on Roza Bal in 2015 that stated, the controversial grave inside the shrine is not the resting place of Jesus Christ, it is actually the grave of Adolf Hitler. The cause furnished there in the news that Netaji Subash Chandra Bose was very close to Adolf Hitler and as well as with Maharaja of Kashmir Hari Singh. British Historian Jerald Graham claimed that Hitler never committed suicide but he escaped. With the help of Netaji, he reached to Kashmir and he was given shelter in a secret place of Roza Bal by Hari Singh. Since 1945, Roza Bal was guarded and no one is permitted in the shrine. Probably he was later buried in Roza Bal.

I have visited the place recently, simply to satisfy myself and to be honest I am no one to unfold the mystery of the controversial grave inside the Roza Bal. Even I have no such capability or knowledge to express views on Roza Bal. Over the years I heard and learn about Roza Bal like others and I furnished here some information from my information pool which I collected over the years. If this post hurt anybody’s sentiment, I apologize in advance.

I have also tried to meet with Dr. Fida Hassnain on 4th July 2016 in his Srinagar residence but his neighbor informed me that he is suffering due to older age. After I reached my hometown on 11th July, I got the news that Dr. Fida Hassnain passed away on 10 July and this penance will remain with me forever.